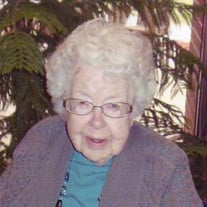 Winifred A. Dennemeyer, age 102, of Menomonie, WI passed away Friday, February 27, 2015 at the American Lutheran Home in Menomonie. The former Winifred Alice Anderson was born November 3, 1912 in the Town of Red Cedar, Dunn County, WI to Rance and Sarah (Butteris) Anderson. She moved with her family to Kenmare, ND in 1918, where Winnie started school. Two years later, the family moved to Hawkins, WI and in1924 the family returned to Dunn County. After completing 8th grade, Winnie worked for Dr. Felland, the local M.D. in Colfax. She did house work and took care of their four children. At age 20, Dr. Felland paid her tuition for business school in the Twin Cities, which resulted in her first professional job. For seven years, Winnie worked as an upstairs maid and assistant to a woman whose family was associated with the Canadian Pacific and Soo Line Railroads. During this time, she spent summers with the family in Gloucester, MA and winters in Sarasota, FL. She met WW I veteran, John “Jack” Dennemeyer in 1932. They were married four months later on Nov. 22, at St. Laurence Catholic Church in Minneapolis. Winnie worked at the Cornelius Plant and part time at Dayton’s Department Store in Minneapolis during WW II. In addition, Winnie helped care for her parents and siblings when they were ill or needed assistance. Winnie developed a special relationship with Cheryl and Elicia Beckerman who lived in their duplex, and for whom she provided care while their parents were at work or on tour with the Minnesota Orchestra. After retirement, Jack and Winnie moved to Brainerd, MN to be close to Jack’s parents. She continued to live in Brainerd after Jack’s death in 1986, enjoying an active social life and friends. At the age of 80, she returned to Menomonie to be close to family. She had resided at the American Lutheran Home since 2010. Throughout her life Winnie was a role model for determination and a generous sense of humor. She was a pathfinder who provided all with an example of how to live a full and fulfilling life. Winnie enjoyed fishing, playing cards and good stories. She was preceded in death by her husband, Jack, and brothers and sisters, Lettie, Lenys, Glen, Vernon and Arnold. She is survived by many nieces and nephews who wish to thank the staff at American Lutheran Homes for the care and attention they provided. Funeral Services will be held at 11:00 a.m. Friday, March 6, 2015 at St. Joseph’s Catholic Church in Menomonie, with Father John Mano officiating. There will be visitation at the church one hour prior to the service. Burial will be in Evergreen Cemetery in Staples, MN at a later date. Olson Funeral Home in Menomonie is entrusted with arrangements. Memorials may be given to St. Joseph’s Catholic Church or American Lutheran Homes in Menomonie to honor Winnie’s life and legacy.

The family of Winifred A. Dennemeyer created this Life Tributes page to make it easy to share your memories.

Winifred A. Dennemeyer, age 102, of Menomonie, WI passed away...