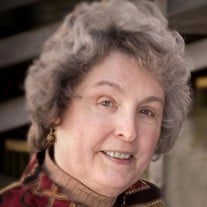 Wilma Erika (Schroer) Steinberger, 80, died Monday, August 28, 2017, at Bethany Nursing Home, due to complications of a stroke. While in hospice care, Wilma died peacefully in her sleep with her family by her side. Wilma was born to Dr. Heinrich Schroer and Erika (Neumann) Schroer on February 22, 1937, in Bestensee (formally Klein Besten) Germany. She was united in marriage on February 8, 1974, to Jerome J. Steinberger in Hudson, Wisconsin. While growing up in Germany, Wilma loved the infamous mountain range in Southwest Germany, known as the Black Forest. She often talked about the picturesque beauty of the mountainous range. While living in Europe some of her adventures included swimming in the English Channel, and skiing the Swiss Alps. Known for her positive outlook on life, and her love of the mountains, she enjoyed spending time sightseeing and traveling in the Rocky Mountain Range during her years in the United States. Wilma had a knack for finances, and joined with her husband in the ownership of a grocery store. Together they retired and moved to Colorado to enjoy the mountain life. Wilma believed that the “answers were inside the mountains.” She loved reading, keeping track of the adventures of her children, grandchildren, and great grandchildren. Most of all, Wilma loved being a homemaker, and being a caretaker. She loved to cook her German cuisine, and often kept her children and other family members guessing on the recipes of her collections. Wilma is survived by her husband; Jerome J. Steinberger of Alexandria, MN; and her 7 children; sons, Paul (TeriJo) Barber of Oklahoma City, Mark Barber of Alexandria, Joe (Shavone) Glaser of North Branch, and her daughters, Andrea (Steve) Lamke of Brainerd, Renata (David) Bye of Fergus Falls, Tonia (Trevor) Dittberner of Miltona, and Angeline (Brain) Eckes of Lakewood, CO. Her grandchildren; Amber, Sommer (Brian), Blake (Caitlin), Jeremy (Lacy), Jacqueline (Michael), Christopher, Casey (Desarae), Amanda (Kyle), Jack, Ashley (David), Thomas, Trey, Teryn, and Riley Ann, and her great grandchildren; Kyler, Ashlynn, William, Elysian, Jaime, Quinn, Emma, Brayden, Devlin, Oriauna, Ayden, MinnaAunaliese, Cataleya, Kasey, and great granddaughter on the way Paisley. Several brother and sister-in-laws, nephew and nieces, and great nephew and nieces. She was preceded in death by her parents, Heinrich and Erika, and her brother Alexander. Memorial Mass will be held on Saturday, September 2, 2017 at 10:30 a.m. at St. John the Baptist Catholic Church in Glenwood City with Father John Long officiating. Burial will take place in the church cemetery. Visitation will be one hour prior to the service at the church. Olson Funeral Home in Menomonie is serving the family.

Wilma Erika (Schroer) Steinberger, 80, died Monday, August 28, 2017, at Bethany Nursing Home, due to complications of a stroke. While in hospice care, Wilma died peacefully in her sleep with her family by her side. Wilma was born to Dr. Heinrich... View Obituary & Service Information

The family of Wilma E. Steinberger created this Life Tributes page to make it easy to share your memories.