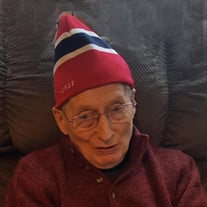 Tuesday, November 2, 2021 William (Bill) Neverdahl was called home. He was strong but his body grew weak. It was time for him to be with God. Bill was born January 16, 1936 in Menomonie, WI to James and Ruth (Prim) Neverdahl. He spent most of his life in Menomonie, the hometown he loved. While attending UW-Stout Bill met Sandy Madsen and they were married in August of 1959. She was the love of his life and together they had three children; Beth, Jo, and Jim. Bill was a Christian and his faith was important to him. He was a member of Christ Lutheran Church and served on the church council, volunteered as a Sunday School teacher, mentored many confirmation kids, and even joined in the children’s story time during church services sitting on the floor with all the other youngsters. Serving others was important to him. He enlisted in the Army after college teaching electronics and was offered a job with NASA, which he turned down to move back to Wisconsin. He began a job working at Chippewa Valley Technical College leading him to become the Assistant Administrator of Adult Education and Curriculum. It was a job he loved and remained at until retirement. The Boy Scouts were also an important part of his life. He was an Eagle Scout and spent many summers helping with scout camp at Camp Phillips. His belief in giving back to the community led him to volunteer as an election worker and to serve as Co-Chair (with his wife Sandy) of the Dunn County United Way Campaign. He was a member of the board for DET and belonged to the Retired Educators group. Bill’s laughter was infectious. He loved to tell stories and his humor was evident in all of them. If you knew him you know he was great at giving, and taking, jokes. His family meant the world to him. He was a proud dad, grandpa, and great grandpa. There wasn’t much he enjoyed better than spending time with family whether it be at the cabin, fishing, swimming, telling stories of old, or reading together. Campfires and s’mores. And…we can’t forget the Aquavit, a family tradition that not everyone enjoyed as much as Bill. Bill is survived by his children Beth (Dean Martin) Tilleson, Jo (Jeremy) Hayes, and Jim (Robyn Larson) Neverdahl; grandchildren, Steven (Brittany) Gerth, Cooper Larson, and Kori Terkelsen, and great-grandchildren, Emmett and Kali Gerth along with his brother Ray (Rachelle) Neverdahl of Texas. He was preceded in death by his wife Sandy and his parents. A memorial service will be held at 11:00 a.m. Monday, November 8, 2021 at Christ Lutheran Church in Menomonie, WI with Pastor Randy Skow-Anderson officiating. There will be visitation from 4:00 to 7:00 p.m. Sunday at Olson Funeral Home in Menomonie with a prayer service at 6:30 p.m. There will also be visitation at the church one hour prior to the service on Monday. Burial will be in Christ Lutheran Halvorson Cemetery in Menomonie with military honors by the Menomonie Veterans Honor Guard. In lieu of flowers the family requests memorials be given to Christ Lutheran church or the Menomonie Library Foundation.

Tuesday, November 2, 2021 William (Bill) Neverdahl was called home. He was strong but his body grew weak. It was time for him to be with God. Bill was born January 16, 1936 in Menomonie, WI to James and Ruth (Prim) Neverdahl. He spent most... View Obituary & Service Information

The family of William J. Neverdahl created this Life Tributes page to make it easy to share your memories.