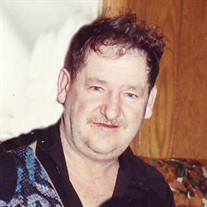 William Edward Murray, 73, left this world at his beloved farm residence, to meet Jesus and join other loved ones in heaven on March 29, 2015. Bill, as most people called him, was born July 18, 1941, and lived his entire life in the rural Menomonie/Downsville area. He was the second born child of his parents, the late Louise (Wolf) and Hugh Murray. Bill was a U.S. Army veteran. Bill was an avid hunter, fisherman, and gardener. He took great pleasure in acquiring equipment that would expand his opportunities and interest in these areas. His love of growing produce in his garden was only exceeded by his joy of giving his harvest to others. He also was a collector of cookbooks which he read with enthusiasm, striving to find recipes to use his garden harvest or things that just might taste great. Bill was a people-person and enjoyed conversations in person or on the phone anytime of the day or night. Many of his lifelong friendships originated through his employment in road construction, factory work and neighborhood affiliations. He liked nothing better than conversations with humor, quick wit or good old-fashioned bantering. He also loved music and would often turn up the volume of country western music or a rousing polka song to add gaiety to the day. Despite Bill's declining health in recent years, he never complained or lost the motivation to be better. He took pride in his independence and never lost hope. An exchange of true love was evidenced when he recently returned home after a prolonged hospitalization and rehab to the wild joy of his little beagle dog. His dog jumped into his arms and never left his side. Bill is survived by his sisters, Patricia (Howard) Webb, Betty (Paul) Wilting and one brother Louis (Jack) Murray. Deceased are his sister, Mary Ann (Carl) Antanitis, his brother, James Joseph Murray and his brother-law Howard Webb. Bill is also survived by twelve nieces and nephews and thirty great nieces and nephews. Many friends, relatives and acquaintances will remember Bill warmly. Bill's family wishes to extend special gratitude to Gina, Molly and Michele who befriended and assisted Bill so he could remain in his own home to the end. Funeral arrangements are being handled by Olson Funeral Home in Menomonie, WI with a Memorial Mass being held Tuesday, April 7, at 11:00 A.M., at St Joseph Catholic Church, 910 Wilson Ave, Menomonie, WI. Visitation will begin at 10:00 A.M. at the church prior to the mass.

William Edward Murray, 73, left this world at his beloved farm residence, to meet Jesus and join other loved ones in heaven on March 29, 2015. Bill, as most people called him, was born July 18, 1941, and lived his entire life in the rural Menomonie/Downsville... View Obituary & Service Information

The family of William E. Murray created this Life Tributes page to make it easy to share your memories.

William Edward Murray, 73, left this world at his beloved farm...