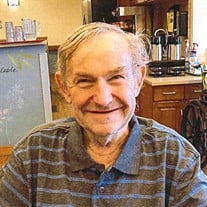 William H. “Bill” Ludtke, age 72, of Boyceville, WI passed away Friday, May 26, 2017 at The Neighbors of Dunn County in Menomonie. His journey in life was complete. Bill was born July 23, 1944 in Menomonie, WI to Oscar and Woleta (Kumferman) Ludtke. Bill spent a majority of his life in the farming industry. He was also employed by the St. Croix Health Center in New Richmond, Brave Harvestore in Menomonie, and Robin Manufacturing in Hudson for a number of years. He then decided it was time to retire and enjoy life. He always had Wrigley’s Big Red, sunflower seeds, butterscotch candy, and root beer barrels on him to snack on. Bill always had a story to tell, whether it was fictional or not he always had a smile on his face. He enjoyed going to tractor pulls, motorcycling, and spending time with his buddies including his special friend Festus. When he would come to see family, Lucy and Bandit, the family dogs were always there to greet him at the door. Bill is survived by his nine children, Sandy Ludtke, Katherine (Robert) Moe, Rebecca (Lance) Andrews, Terry (Cindy) Ludtke, Janet (David) Ludtke, Matthew (Megan) Ludtke, Victoria (John Danielson) Ludtke, Mitchell Ludtke and Wyatt Ludtke; grandchildren, Thomas (Kali) Ludtke, Kordell Moe, Ralph Williams IV, Rylie Andrews, Lexi (Chase) Lee, Dijon Ludtke, Braxton Ludtke, Ethan Ludtke, Grant Ludtke; and great-grandchildren, Jolenee Gregory-Ludtke and Aubrie Lee. He is also survived by his half-brothers, Robert (Joan) Ludtke, Roger (Betty) Ludtke, and half-sister Anne Seeger; as well as other relatives including David, Eva and Allyn Churchill and friends. He was preceded in death by his parents, Woleta and Oscar; step-father Orville; half-sister Shirley Schroeder; and grandson Ryan Williams. Funeral services will be held at 1:00 p.m. Thursday, June 1, 2017 at Trinity Lutheran Church in Boyceville, WI with Pastor Brad Peterson officiating. There will be visitation from 4:00 to 7:00 Wednesday at Olson Funeral Home in Menomonie and at the church one hour prior to the service on Thursday. Burial will be in Tiffany Cemetery in Boyceville.

The family of William "Bill" Ludtke created this Life Tributes page to make it easy to share your memories.