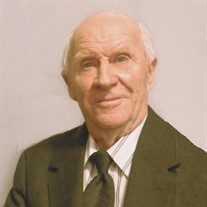 William “Bill” Roger Peterson, age 85, of Menomonie, WI passed away Friday, May 18, 2018 at Neighbors of Dunn County in Menomonie. He was born August 14, 1932 to Oscar and Helen (Klatt) Peterson. He was raised in the Town of Dunn, Dunn Co. WI and attended Durand High School. On December 24, 1956, Bill married Laurel Evelyn Wolf in Tacoma, WI. They had five children. Bill served in the U.S. Army from 1956 to 1958, stationed in Korea. He was a Radar Traffic Controller and had to write everything backwards on the radar screen to be read by personal on the other side. After his military service, he lived in Menomonie, and worked for Fletcher Construction in 1958. In 1959, he started at Sanna Dairies, working in shipping and receiving for 15 years. In 1967 he started farming in the Town of Dunn, Dunn Co. WI. He retired from milking cows in 2001, but continued to crop farm for a few years. Bill loved to get together for family and social gatherings where he would sit and talk for hours with family, friends and neighbors. He could always be counted on to keep the wood stocked for all the camp fires. He loved to play horseshoe, baseball, pool, volleyball and bean bags. Bill really enjoyed playing the games with his children and grandchildren showing them how to improve their game. You could always see him at the local games. Bill is survived by his wife Laurel; five children, Martin Peterson, Sarah (Jeff) Luer, Norah (Dan) Olson, Lylah (Mark) Peterson, Amanda (Mike) Burgraff; grandchildren, Paula (Troy) Olson, Houston Olson, Dallas Olson, Riley Burgraff; great-grandchildren, Skylar Peterson-Hagen, Kiayanna Peterson-Hagen, Nayomee Olson, Trayce Olson; a brother, David (Barb) Peterson; brothers-in-law, Lawrence Wolf and Glen Ziehme. He is also survived by several nieces, nephews, cousins and great-nieces and nephews. He was preceded in death by his parents, Oscar and Helen Peterson and a sister Doris Ziehme. Bill will be greatly missed by his two favorite companions, Rusty and Shadow. Funeral services will be held at 11:00 a.m. Tuesday, May 22, 2018 at New Hope Lutheran Church in Downsville, WI with Pastor Dale Moe officiating. There will be visitation from 4:00 to 7:00 p.m. Monday at Olson Funeral Home in Menomonie and at the church one hour prior to the service on Tuesday. Burial will be in Riverview Cemetery in the Town of Dunn, Dunn Co. WI with military honors by Menomonie Veterans Honor Guard. To share a memory, please visit obituaries at www.olsonfuneral.com

The family of William "Bill" R. Peterson created this Life Tributes page to make it easy to share your memories.