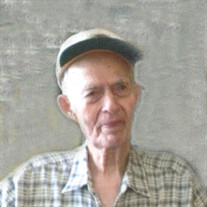 Wilbur “Bill” H. Rice, age 92 of Menomonie, passed away on Wednesday, September 20, 2017 at American Lutheran Home in Menomonie under hospice care. Bill was born on April 2, 1925 to Harry and Elizabeth (Cutting) Rice in Chippewa Falls, WI. He attended Plainview grade school. Bill served his country in the U.S. Navy during WWII. In June of 1948 he married Dorothy Madsen, to this union three children were born, Evelyn, Barry, and Charles. They later divorced. Bill enjoyed the outdoors in many ways; whether it was a drive through the countryside to see the fall colors or to visit an area park. He liked to go fishing, throw horse shoes and woodworking. Bill owned & operated 'Rice's store' on the corner of HY 64 & W from 1955 until 1971. He also drove school bus for Plainview grade school for many years delivering hundreds of kids to & from school daily. Bill is survived by daughter Evelyn (Terry) Hoppe of Prairie Farm, sons Barry (Vicki) Rice of Colfax and Charles Rice of Chetek; grandchildren, Traci (Ted) Burleson, Julie Goodell (Corey Johnston), Ruth Hoppe; great grandchildren, Erin, Alexandra, Brittany, Kade, and Lydia; great great-grandchildren, Harper and Owen; he is also survived by many nieces, nephews, other relatives and friends. He was preceded in death by his parents Harry and Elizabeth, sisters Evelyn, Vivian, Hazel, Muriel, brothers Lyle and Warren also sister-in-law & best friend, Berniece Rice. A gathering in Bill’s memory will be held from 4:00 p.m. to 7:00 p.m. Friday, September 29, 2017 at Olson Funeral Home in Menomonie. Military honors will be at 7:00 p.m. by the Menomonie Veterans Honor Guard. Burial of his remains will be at sea at a later date. The family would like to thank St. Croix hospice & the American Lutheran Home in Menomonie. Also a thank you to Barb & Millie who kept a watchful eye on Bill while he lived in Tantara Apartments and who continued to help until his passing. In lieu of flowers, donations can be made in to Stepping Stones of Dunn County or Dunn county humane association

The family of Wilbur "Bill" Rice created this Life Tributes page to make it easy to share your memories.