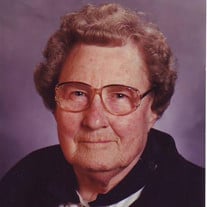 Violet Leola “Sister Marie Karen” Hawkinson, was called home on Tuesday, Dec. 2, 2014 at the age of 101. She passed away at the Neighbors of Dunn County in Menomonie. Violet Leola was born Oct. 24, 1913 in Menomonie, WI to Ole and Inga (Stubban) Hawkinson. She grew up in North Menomonie attending North School and Menomonie High School. “Vi” graduated from St. Olaf College in Northfield, MN, majoring in Biology, Youth Guidance and Physical Education, receiving her Bachelor’s degree in 1936. While at St. Olaf, she was offered a Youth Guidance position at the Green Bay Y.M.C.A, in the High Schools of Green Bay, DePere and Allouez School. Vi also directed the Green Bay and Madison Y.M.C.A. Camps. She pursued her graduate studies in the School of Social Work at Western Reserve University in Cleveland, Ohio, then took graduate work at the University of Wisconsin in Physical Therapy and received her Master’s Degree at Marquette University in Counseling, Guidance and the Sciences. Vi taught College Physiology at Edgewood College in Madison prior to entering the Dominican Order of teaching Sisters, hence the name Marie Karen. Upon becoming a “Religious”, she dedicated her life to teaching the Life of Christ, Biology and Physical Education for nine years at Trinity High School in River Forest, IL. She then taught at Visitation High School in Chicago, to be followed by St. Clara Academy and the Novitiate. In 1961, Marie Karen received the “Distinguished Alumni Award” from the President of St. Olaf for having the “courage of her convictions to dedicate her life to the service of God in a teaching Order of Dominican Sisters.” In 1964, Marie Karen accepted the invitation to direct Camp We-Ha-Kee for girls, at Winter, WI. The international interfaith camp drew campers and staff from 13 countries around the world. The camp provided very diversified activities that proved educational and life enriching. She helped girls learn to live compatibly with different cultures. While directing Camp We-Ha-Kee, she was President of the Wisconsin Camping Association from 1967 to 1972, which also involved chairing a five-State Convention in Milwaukee in 1968. She also assisted in the accreditation of other camps for the National American Camping Association. Marie Karen dedicated 20 years as the director of Camp We-Ha-Kee, retiring at the age of 73. She was very active in local churches, provided religious support for the home bound and dedicated her life to the council and support of all who knew her. In 2005, Karen Hawkinson received a “Woman of Distinction” award for her life-inspired guidance of youth, presented by the Girl Scouts of Indian Waters Council. Vi is survived by her nieces, Jacqueline Finder of Menomonie, Shirley Olson of St. Paul MN, Sharon Michaud of Arvada CO, Sandra Zahurones of Belvidere IL, Jean Drury of Boyceville, Elaine Hawkinson of Menomonie and many great nieces and a great nephew as well as other relatives and friends. She was preceded in death by her parents, Ole and Inga Hawkinson, her brothers, Alvin and Arnold Hawkinson and nephews, Jerry and Thomas. Funeral services will be held at 11:30 a.m. Monday, Dec. 8, 2014 at St. Joseph’s Catholic Church in Menomonie, with Father John Mano officiating. There will be visitation at the church one hour prior to the service on Monday. Burial will be in Christ Lutheran Halvorson Cemetery in the spring. Olson Funeral Home of Menomonie is serving the family.

The family of Violet "Sister Marie Karen" Hawkinson created this Life Tributes page to make it easy to share your memories.