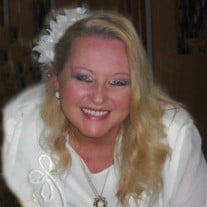 Tracey Renee Stevens Tryggestad, 51, was granted her angel wings on August 31, 2015 at Osseo Hospital following an unexpected event while recovering from Open Heart surgery. She was born on July13, 1964 in Hamilton, Ontario. Tracey married the love of her life and best friend, Randy Tryggestad on June 2, 2012 near the village of Eleva, WI. The couple devotedly attended the Church of the Nazarene in Wheeler and Eleva. Prior to her illness, Tracey was employed as an office Assistant at Menards in Eau Claire, WI where she developed close friendships. Tracey is survived by her husband, Randy Tryggestad, her mother Dorothy Owens Stevens, and Sisters, Cindy Skura (George), and Dawn Stevens. There are numerous extened family and members of the Johnson family who have always remained dear to Tracey’s heart. Her infant son, Jacob who died at birth and her father, Dennis Stevens, precedes Tracey in death. Tracey always had a soft spot for all animals, was good with her hands in creative crafts, and enjoyed buying online jewelry but her passion was cooking new recipes. She excelled at pierogi, her signature dish from Ontario. Of all her talents, her best was loving her husband, Randy and endearing herself into the Tryggestad family with her sweet personality in such a short time. Some would say that Tracey’s life was cut short and she did not reach a full measure of years. But those who were touched by her understand that the quality of existence far exceeds the quantity of time in which one lives. As a new believer, Tracey had an unwavering faith in God and now she lives with Jesus and all who love Him. Visitation will be held at the Olson Funeral Home, 615 Wilson Ave. Menomonie, WI on Friday, September 4, 2015 from 4-8 PM. The funeral will be held the following day, September 5, 2015 at the New Life Church of the Nazarene, 704 W Main St, Wheeler, WI at 11AM with Rev. Steve Crites officiating. Interment will follow at the Hay River Cemetery, Wheeler, WI

Tracey Renee Stevens Tryggestad, 51, was granted her angel wings on August 31, 2015 at Osseo Hospital following an unexpected event while recovering from Open Heart surgery. She was born on July13, 1964 in Hamilton, Ontario. Tracey married the... View Obituary & Service Information

The family of Tracey R. Tryggestad created this Life Tributes page to make it easy to share your memories.