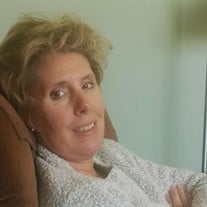 Tonya Mary Anderson 53, departed on her last and greatest adventure on Friday, December 29, 2017 surrounded by family and being well cared for with the assistance of Mayo Hospice. She left fully prepared and unafraid of what God had in store next. She was grateful to have had the time to spend and say goodbye to those she loved prior to her death. Tonya was born March 30, 1964 to John and Arlene Petrick in Eau Claire WI. Following high school, she decided to spend the summer of 1985 in Fairbanks, AK, where she ended up staying for 14 years. While there, she married Harry Jamison Tum and had her two sons John and Adam. Unfortunately, life took a tragic turn and Harry died, leaving Tonya and their two young sons. This prompted the return to Wisconsin to be closer to family in 1999. Three years after moving back she met and married Norman Anderson, to whom she remained married for15 years. It was after her return from Alaska that she began her career in nursing, first as an associate degree registered nurse, then earning her bachelors degree, and finally master’s degree in nursing. The last four years spent working as a Mayo Clinic Nurse Practitioner, caring for Red Wing MN nursing home residents. Tonya loved her job caring for her patients, not only because of the immense satisfaction from helping others, but because she found the human body and its mysteries absolutely fascinating. She was preceded in death by her parents John and Arlene Petrick. She is survived by her sons John Edison Tum and Adam Nathaniel Tum. She is also survived by her siblings John (Dorothy) Petrick, Constance Petrick, Sally FitzGerald, Chris (Herb) Lund Holtz, Laurel Riedel, Corine Twin and Barbara (Vern) Jesse. She is survived by many nieces and nephews; Jacob, Thomas, Joseph, Sarah, Vanessa, Joanna, Cassandra, Anna, Lindsey, Jack, Ellen, Erica and Kyle. In lieu of flowers, Tonya supported Branches Church, The Salvation Army, Dunn County Food Pantry and Hope Gospel Mission. A Celebration of Life will be held at 11:00 a.m. Wednesday, January 3, 2018 at Olson Funeral Home in Menomonie with Pastor Mike Shay officiating. Visitation will be one hour prior to the service.

Tonya Mary Anderson 53, departed on her last and greatest adventure on Friday, December 29, 2017 surrounded by family and being well cared for with the assistance of Mayo Hospice. She left fully prepared and unafraid of what God had in store... View Obituary & Service Information

The family of Tonya M. Anderson created this Life Tributes page to make it easy to share your memories.

Tonya Mary Anderson 53, departed on her last and greatest adventure...