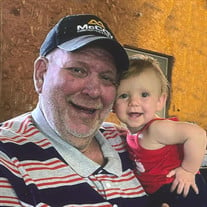 Todd C. Stainer, age 56, of Menomonie, WI went home to his heavenly Father, Sunday, Aug. 22, 2021, at his home. He was born March 5, 1965, in Menomonie, WI to Keith and Susan (Hall) Stainer. He grew up on his family’s farm between Irvington and Weston and graduated from Menomonie High School in 1983. On Feb. 2, 1991, Todd married Elene Kostman at the Mabel Tainter Center for the Arts, in Menomonie. Together with their family of four children, they farmed, raising Percheron’s, sheep, pigs, and beef cattle. Todd loved watching his children and others, show 4-H/FFA animals at the Dunn County Fair. He was an avid softball player who hit many home runs playing for the “Bud Hawks” and “The Bear Creek” teams. His children have followed in his footsteps and continued to be avid softball players on his team, Stainer Logging. Todd loved to be home on the farm or in the woods logging. He loved the outdoors and looked forward to every deer hunting season with his children and close friends. Todd was never short for words; he would take the time to stop and visit with everyone in person or on the phone. He truly cared about everyone. Todd was a wonderful husband, father, and grandfather. He prayed to God nightly and many of his prayers were answered. Todd is survived by his wife of thirty years Elene “Doodie” of Menomonie; three daughters, Shanen (Jason) Stuart, Brooke (Jake Redetzke), Sarah (Kyle Holden); one son Brady Todd (Holly Dettmering); and one granddaughter he loved so much, Shaylee Stuart. He is also survived by his father Keith (Anastasia) Stainer and his mother Susan Stainer of Menomonie; two sisters, Melissa (Tyrone) Cockeram and sons of Eau Claire, WI and Christine Stainer of Tucson, AZ; an aunt Elaine Stratton; as well as other relatives and many friends. He was preceded in death by his grandparents, Charles and Ruth Stainer; father-in-law LeRoy Kostman; and an uncle Bill Stratton. A Memorial Service will be held at 5:00 p.m. Friday, Aug. 27, 2021, at Olson Funeral Home in Menomonie, WI with Pastor Bob Friese officiating. There will be visitation at the funeral home from 2:00 p.m. until the time of the service. Following the service there will be a gathering in Todd’s memory at Kyotes.

The family of Todd C. Stainer created this Life Tributes page to make it easy to share your memories.