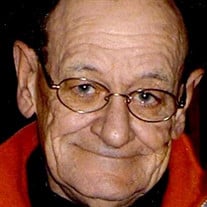 Terry Wolf, 70, of Sioux Falls, South Dakota, formerly of Menomonie, Wisconsin, died Saturday, February 11, 2017. Terry Bernard Wolf, son of Bernard and Veronice “Susie” (Wood) Wolf, was born December 17, 1946, in Menomonie, Wisconsin. He graduated from Menomonie High School with the class of 1965. He was united in marriage to Sharyl Smeltzer on January 23, 1965, in Menomonie. They were blessed with two children: Tim and Christy. Terry worked in construction for the early part of his life where he specialized in concrete work. The family moved to Sioux Falls in 1979. Terry was employed as a retail manager at Menards in Sioux Falls for over 10 years. Some of his joys in life were hunting, fishing, and woodworking. Other hobbies were playing slow pitch softball, golfing, and making model trains. He treasured spending time with his family, especially his grandchildren. Terry is survived by his wife, Sharyl of Sioux Falls; children, Tim (Peggy) Wolf of New Brighton, MN and Christy (John) Rockwell of Fridley, MN; five grandchildren, Olivia, Connor, Alexandra, Katherine, and Matthew; sisters, Karen Retzloff of Colfax, WI, Kathy (Fred) Ayres of Eau Claire, WI, and Karmen (Fred) Draeger of Wabasha, MN. He is also survived by nieces and nephews and other relatives and friends. He was preceded in death by his parents. Visitation will be held from 5:00 p.m. until 7:00 p.m. Wednesday, February 15, 2017 at George Boom Funeral Home and Crematory in Sioux Falls, SD. A funeral service will be held at 11:00 a.m. Friday, February 17, 2017 at Olson Funeral Home in Menomonie, Wisconsin with Pastor Sarah Miller officiating. There will be visitation from 10:00 a.m. until the time of service at Olson Funeral Home. Burial will be in Cedar Falls Cemetery.

The family of Terry B. Wolf created this Life Tributes page to make it easy to share your memories.