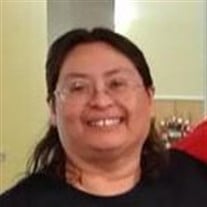 Terri Renae Evans, age 52, of Menomonie, WI passed away Friday, Nov. 11, 2016 at The Neighbors of Dunn County in Menomonie. She was born October 7, 1964 in Merrill, WI. Her father was Polish and her mother Native American (Lac du Flambeau). She was the youngest of eleven children. From the time she was age two, Terri was placed in a number of foster homes and an adoptive home. During each of her placements remarks were recorded about her genial disposition and intelligence. In 1970 when she was six years old, Terri was adopted by Robert and Marie Evans. Personality traits mentioned pre-adoption have continued throughout her life and she has been a consistent steady delight. Terri graduated from UW-Stout with a BA degree in psychology. After graduation she worked for many years as a program manager for Aurora Community Services in Menomonie. In addition she volunteered at many places including Mabel Tainter Center for the Arts, night shifts in a homeless shelter, Ms. Wheelchair Wisconsin, Meals on Wheels, and other worthy projects. Terri loved animals. At one time she had three cats, three dogs, a rabbit and a guinea pig living with her. Her dog Scoutie was Toto in The Wizard of Oz production at the Mabel Tainter. Her most recent adored pet was Oliver, a guinea pig. She loved fishing and especially enjoyed this activity with her friend and nephew Brett Evans. Last November Terri was diagnosed with stomach cancer. Thanks to medical professionals at Mayo Clinic for extending her life. She was in remission for six months spending much of this time at a cabin with family and friends. From her Caring Bridge: “I have had an awesome summer…” It is difficult to express adequately the joy Terri has given to her family and also to her treasured friends. She was a unique and beautiful person who truly blessed our lives. Terri is survived by her mother, Marie Evans of Eau Claire, WI; sister, Anne (Bob) Mitchell of Apple Valley, MN; brothers, David (Beth) Evans of Eden Prairie, MN and Jeff (Julie Rieper) Evans of Chippewa Falls, WI and many aunts, uncles, cousins, nieces, nephews and friends. She was preceded in death by her father, Robert Gray Evans. Memorial Services will take place at 4:00 p.m. Thursday, Nov. 17, 2016 at Cedarbrook Church, N6714 470th St. Menomonie, WI with Pastor Remy Diederich officiating. There will be visitation from 2:00 p.m. until the time of the service at the church on Thursday. Olson Funeral Home in Menomonie is serving the family. Memorials are suggested to Dunn County Humane Society or Mabel Tainter Center for the Arts.

Terri Renae Evans, age 52, of Menomonie, WI passed away Friday, Nov. 11, 2016 at The Neighbors of Dunn County in Menomonie. She was born October 7, 1964 in Merrill, WI. Her father was Polish and her mother Native American (Lac du Flambeau).... View Obituary & Service Information

The family of Terri R. Evans created this Life Tributes page to make it easy to share your memories.