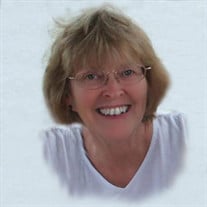 Suzanne Marie Wieman, age 75, of Menomonie, Wisconsin was welcomed into her heavenly home on Thursday, December 16th after fighting a heroic battle with Progressive Supranuclear Palsy. She was born on November 16, 1946 in Elk Mound, Wisconsin to Philip and Marvel (Rose) Brown. Affectionately known as Suzie, she had four brothers: Philip Jr. (Bud), Gerald, Roger, and Michael. Philip and Marvel raised Suzanne and her brothers on the family farm in Colfax, Wisconsin. She graduated from Colfax High School in 1964. Following her love of science and the encouragement of her biology teacher, she enrolled in the Milwaukee County General Hospital School of Nursing and climbed a Greyhound bus headed for Milwaukee in the fall of 1964. She was at top-student and graduated in 1967 with a Registered Nursing degree. She moved to Eau Claire to begin her 34-year nursing career at Sacred Heart Hospital. She discovered a passion for geriatric nursing and spent the majority of her career serving elderly patients at the Dunn County Health Care Center until 2001. In 1970, Suzanne married David Jenson of Elk Mound. In 1971, they welcomed they first child Tania Elizabeth. A year later they built a home in Elk Mound, Wisconsin and welcomed their second child, Kyle David. Prior to their marriage ending, Suzanne and David spent many happy years taking family trips “Out West,” and supporting their active children in all of their activities in the Elk Mound Public Schools. Suzanne loved being a mother. She always valued making memories with her children more than a clean house. She loved to cook with Tania, spending girl-time at the mall (“bumming around” as she called it) and often served (patiently) as the sole audience member for one of Tania’s impromptu theatrical, musical or dance numbers. As an avid sports fan, she loved pitching to Kyle, playing a game of HORSE, and shuttling him to countless football, baseball, and basketball practices, tournaments, and games. Even with a nurse’s schedule, she made every birthday and holiday special. She worked hard to ensure Tania and Kyle had all they needed to become happy, healthy, successful adults. In 1994, Suzanne met the love of her life, Larry Wieman at the laundromat in Menomonie – just a few blocks from a home she had just purchased. They married on June 28, 1996. They loved to have adventures together. Camping in national parks, road trips to the mountains, ziplining in Puerta Vallarta, sipping tequila in Cancun, day-tripping to the Eau Galle Cheese Factory or Sailer’s Meat Market – as long as “Sue” and Larry were together, there was joy. In 1999, they built their dream home, a log home where she spent her final days. While at home, Suzanne and Larry enjoyed working in their large vegetable garden and listening to Milwaukee Brewers games (something Suzanne fondly remembered doing with her father back in Braves era). Suzanne loved tending her flower garden and spent hours quilting, cooking, and reading. Suzanne also adored her grandchildren. Play-Doh, crayons, Legos, trains, books, crayons, cars, puzzles, and “critters” strew the floor and counters. Cheetos and Oreos were frequently on the menu at Grandma’s house. She was always ready to play hide and seek, build a snow man, or jump over mudpuddles. Treasure hunts in the woods always ended with pockets full of rocks and little fistfuls of wildflowers. She even let little ones “redecorate” her kitchen with soap suds, fingerpaint, flour, and frosting. The messier and sillier the better when it came to time spent with “her babies.” Suzanne is survived by her husband of 25 years, Larry Wieman; her brothers Michael (Janetta) Brown and Philip, Jr. “Bud” Brown; sisters-in-law, Sally Brown, Marlene Backus and Karen (Dave) Wallace; and her daughter, Tania (Jeff) Renken, her son, Kyle (Cathy) Jenson; her stepdaughter, Lora (Jesse Marion) Wieman; her granddaughters Madeline (Alexander) Theisen and Alexandra, Regan, and Ava Jenson; her grandsons, Grant and Cade Renken and Ryan Schuh. She is also survived by her former husband, David (Judy) Jenson; her aunt, Marion Ausman; her aunt, Twila Rose; nieces, nephews, and cousins. Suzanne is preceded in death by her parents, Philip and Marvel Brown; her brothers Gerald and Roger Brown; her nephew, Craig Brown; and sisters-in-law, Cany and Betty Brown. Funeral services will take place at Olson Funeral home in Menomonie, Wisconsin on Wednesday, December 22nd. A visitation will be held from 1:00 – 2:00 pm, followed by a funeral service at 2:00 pm. with Pastor Bob Friese officiating. The family asks that those who wish to honor Suzanne’s life consider making a donation in her memory to Stepping Stones of Dunn County www.steppingstonesdc.org or St. Jude’s Children’s Hospital.

Suzanne Marie Wieman, age 75, of Menomonie, Wisconsin was welcomed into her heavenly home on Thursday, December 16th after fighting a heroic battle with Progressive Supranuclear Palsy. She was born on November 16, 1946 in Elk Mound, Wisconsin... View Obituary & Service Information

The family of Suzanne M. Wieman created this Life Tributes page to make it easy to share your memories.