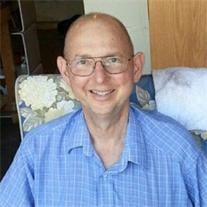 Stuart R. Fullarton, age 65, of Menomonie, WI died Sunday, September 21, 2014 at his home in Menomonie. Stu was born May 30, 1949 to Russell and Monica (Katzner) Fullarton in Dubuque, IA. He was raised in Dubuque, attended primary and high school there, and then received a degree in Architecture and Energy Systems Engineering from Iowa State University, Ames, Iowa. During college, he met Kathy Roberts and they were married on August 19, 1971. He enlisted in the U.S. Army and was stationed in Germany for 3 years. He and Kathy adopted four children; Angie and Becky from Korea and Eric and Chris from India. Stu was a registered architect who taught Architecture and Lightning Design at UW-Stout, and then at WITC-Rice Lake. He retired in the late 2000's and took up photography which was always a favorite hobby of his. He was an active member of the Menomonie Rifle and Pistol Club and was a Hunter Education instructor for the youth for many years. Stu is survived by his wife Kathy of Menomonie; children, Angie (Michael) Benson of Warrensburg, MO, Eric Fullarton of Menomonie, Becky Fullarton of San Francisco, CA and Chris (Dana) Fullarton of Eau Claire; grandchildren, Malik and Adair Fullarton and Max Benson; brothers, Craig Fullarton of Dubuque, IA and David Fullarton of Ames, IA; his mother-in-law, Florence Roberts of Winterset, IA; and also survived by other relatives and friends. He was preceded in death by his parents, Russell and Monica Fullarton; brother, John Williams; and father-in-law, Harold Roberts. A Memorial Service will take place at 11:00 a.m. on Friday, September 26, 2014 at Peace Lutheran Church in Menomonie. Visitation will be from 4:00 p.m. until 7:00 p.m. on Thursday, September 25, 2014 at Olson Funeral Home in Menomonie and also one hour prior to the service at the church on Friday. Burial with Military Honors will be accorded on Friday afternoon at Northern Wisconsin Veterans Memorial Cemetery in Spooner, WI. The family suggests memorials to a charity of the donor's choice.

Stuart R. Fullarton, age 65, of Menomonie, WI died Sunday, September 21, 2014 at his home in Menomonie. Stu was born May 30, 1949 to Russell and Monica (Katzner) Fullarton in Dubuque, IA. He was raised in Dubuque, attended primary and high... View Obituary & Service Information

The family of Stuart R. Fullarton Obituary created this Life Tributes page to make it easy to share your memories.