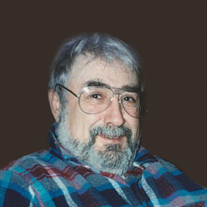 Stanley Stephen Hicks, age 79, of Menomonie, Wisconsin passed away Sunday, May 7, 2017 at the VA hospital in Minneapolis, MN due to surgery related complications. Stanley was born July 22, 1937 in Elyria, Ohio to Stephen and Mary Lois (Karnes) Hicks. Stanley grew up in the Lucas and Boyceville areas. Stanley married the love of his life, Joyce (Schutts) September 29, 1962 at Peace Lutheran Church in Menomonie, Wisconsin. They had three beautiful children. Stanley and Joyce enjoyed camping with their children and went on many fun and exciting adventures together. He was an avid outdoorsman with a great respect of nature who loved to fish and hunt. He also enjoyed golfing every Thursday with his life-long friends and bowling on Fridays with all of his league friends. Stanley was a member of the Dunn County Bee Keepers Association and kept up his own hives. Stanley was also very proud to have served his country as a member of the United States Army from 1957 through 1964. Stanley is survived by his wife of 54 years, Joyce; two sons, Stephen (Kalen) Hicks, Todd (Terri) Hicks, one daughter, Ann Wilm; grandchildren, Brett Wilm, Kyle Wilm, Zachary Hicks and Caitlyn Hicks. He is also survived by his sister, Gwenn (Dean) Maddock and his brother, Michael (Janice) Hicks; Sisters-in-law, Judith (Ronald) Pierson and Susan (James) Lewis; Brother-in-law Valgene (Spring) Schutts and many nieces, nephews and friends. He is further survived by his grandchildren at heart; Cassy Berger, Destinee and Hunter Yang, Miranda Debee, Allison Walker, James Markham and Chris Tschumper. Stanley was preceded in death by his parents; Stephen, Lois and Marion; a brother, Philip; parents-in-law, Orville and Clara Schutts; sister-in-law, Sharon Larson; nieces Brenda and Rhonda Pierson and great niece, Kylie Kay Larson. Visitation and celebration of life will be held from 4:00 pm to 7:00pm, Monday, May 15, 2017 at the Olson Funeral Home in Menomonie, Wisconsin. Interment will follow on a later date, Friday May 26, 2017 at Lucas Cemetery with military honors by Menomonie Veterans Honor Guard.

Stanley Stephen Hicks, age 79, of Menomonie, Wisconsin passed away Sunday, May 7, 2017 at the VA hospital in Minneapolis, MN due to surgery related complications. Stanley was born July 22, 1937 in Elyria, Ohio to Stephen and Mary Lois (Karnes)... View Obituary & Service Information

The family of Stanley S. Hicks created this Life Tributes page to make it easy to share your memories.