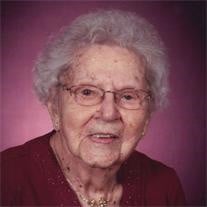 Sophie Angeline (Horky) Suneson Olsen, 96 of Boyceville and Menomonie, passed away on November 6 at Care Partners in Menomonie. She was born on November 17, 1916 to Andrew and Anna Horky on their farm in rural Boyceville. She was one of 13 children and was a member of Trinity Lutheran Church of Boyceville and had been active in the Women's Circle and quilting group. She was also active in Red Cross Blood Drive and at the Senior Center in Boyceville. In 1939, she married Paul Suneson in Boyceville. Together they farmed briefly in Illinois and then in Boyceville for 23 years. Together they raised two children, Ardys Marie Suneson Young Van Kleeck Klatt and Donald Suneson. After they sold the farm in 1966, they lived in a home outside of Boyceville. Paul died in 1985. In 1988 she married Roy Olsen and together they lived at that home until Roy's death in 1996. She did not get to go to many places as a child, but she made up for it as an adult traveling to visit many relatives in states all over the US. She also enjoyed traveling with friends and relatives to Mexico, Alaska, Canada, England, and other countries. She especially loved visiting her parent's homeland in Czechoslovakia. She was preceded in death by her parents, 12 brothers and sisters, husband Paul Suneson, husband Roy Olsen, daughter Ardys Marie and son-in-law James Van Kleeck. Sophie is survived by her son Donald (Arlene) Suneson, sister-in-law Eleanor Coutre, step children Melodee (Bob) Forrest; Charlene Olsen (Tim Hop); Charlotte (Joe) Newville; Jill (Jerry) Kunkel; and Melroy (Allyn) Gess; grandchildren Brad (Ada) Suneson, Michele (Scott) Odle. She is further survived by great grandchildren Carter, Zachary and Cali Odle; step grandchildren James Van Kleeck Jr.; Shelley (Doug) Hoglund, Gary (Denise) Kunkel; Jeremy (Kelly) Gess, Brandon (Missy) Gess and Nathan Gess; Danielle (Ross) Forrest Stansbury, Brianna(Cody) Forrest McGee; Shalayne Hop; Cole, Alexis and Bridgett Newville; step great grandchildren Travis, Brittney and Brady Hoglund; Hannah Kunkel, Allen and Justin Luke; Madelyn, Jaden and Tanner Gess; Clay, Charlie, Lily and Oliver Gess; Sadie Forrest and Lawrence Stansbury; and Brooclyn Luke. We wish to thank the staff at Care Partners, Mayo Clinic Home Health and Hospice for their care and to the special friends and family members who helped Sophie with errands and doctor visits through the years. Funeral services will be held at 11:30 a.m. Monday, November 11, 2013 at the Trinity Lutheran Church in Boyceville, WI with Pastor Brad Peterson officiating. Visitation will be from 10:00 – 11:30 a.m. at the church. Private burial will be at Tiffany Cemetery in Boyceville. Memorials preferred to Trinity Lutheran Church or charity of donor's choice. Olson Funeral Home in Menomonie is serving the family.

Sophie Angeline (Horky) Suneson Olsen, 96 of Boyceville and Menomonie, passed away on November 6 at Care Partners in Menomonie. She was born on November 17, 1916 to Andrew and Anna Horky on their farm in rural Boyceville. She was one of 13... View Obituary & Service Information

The family of Sophie Suneson Olsen Obituary created this Life Tributes page to make it easy to share your memories.