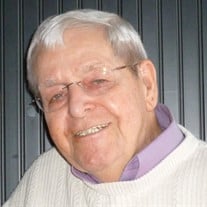 Simon A. Olson, age 95, of Menomonie, WI passed away Wednesday, July 31, 2019 at The Neighbors of Dunn County, with St. Croix Hospice. He was born March 11, 1924 in the Town of Stanton, Knapp, WI to John and Katherine (Retelstorf) Olson. He attended grade school and graduated from Downing High School. Si joined the Merchant Marines during W.W. II and while on leave he married Betty Lou Schultz on July 6, 1945 in New York City, NY. Having recently celebrated their 74th wedding anniversary, they have enjoyed many wonderful experiences together, such as traveling throughout most of the United States, as well as overseas to Hawaii, Japan, Norway, Sweden, Denmark, Germany, Switzerland and England. Si had an uncanny ability to remember towns, road numbers and restaurants the two of them ate at on many of their trips. Being a very social person, he always seemed to run into someone he knew, and had no problem striking up a conversation with anyone he met. In 1946, Si started working for the Stout Institute, which became the University of Wisconsin, Stout and spent 39 years as an electrician there. After retirement, Si and Betty spent time between Wisconsin and their home in Mesa, AZ. Many hours were spent watching the grandchildren in their sporting events. Simon is survived by his wife Betty; sons David, Tom (Kristie) of Menomonie, WI and Robert (Barbara) of Virginia Beach, VA; grandchildren, Ryan (Lyndsey, Sean (Katie), Alex (Amanda), Meghan and Robert Jr.; and great-grandchildren, Jade and Adelyn. He is also survived by his brother John (Virginia) Olson; sisters-in-law, Vera Olson and Bernadene Olson; and many nieces and nephews. He was preceded in death by his parents; brothers, Jonas and Kenneth Olson; sisters Norma (Fred) Wyss, Katherine (Lorn) Jaeger, and Christine (Gene Hammer/Donald Hannack). A Memorial service will be held at 11:00 a.m. Monday, August 5, 2019 at Peace Lutheran Church in Menomonie, with Pastor Bob Friese officiating. There will be visitation at the church from 9:30 a.m. until the time of the service on Monday. Burial will be in Peace Lutheran Cemetery in the Town of Menomonie, Dunn Co. WI. Olson Funeral Home in Menomonie is serving the family. Memorials are suggested to Peace Lutheran Church or The School District of Menomonie Food Service Angel Fund. 215 Pine Ave., Menomonie, WI 54751.

Simon A. Olson, age 95, of Menomonie, WI passed away Wednesday, July 31, 2019 at The Neighbors of Dunn County, with St. Croix Hospice. He was born March 11, 1924 in the Town of Stanton, Knapp, WI to John and Katherine (Retelstorf) Olson. He... View Obituary & Service Information

The family of Simon A. Olson created this Life Tributes page to make it easy to share your memories.