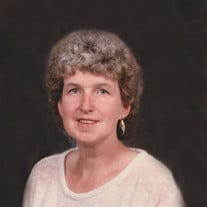 Shirley Ann Berg, age 69, of Menomonie, Wisconsin, passed away peacefully on October 26, 2017 after a long battle with Alzheimer’s. She was born March 4, 1948 in Amery, Wisconsin and graduated from Unity High school in 1966. Shirley met the love of her life, Duane G. Berg in 1968 and they married in 1969. She loved to sew, numerous yarn crafts, baking, canning, and camping with family and friends. Shirley loved her family dearly and was loved and adored by her family and friends and will be sadly missed. Shirley is survived by her husband of 49 years, Duane G. Berg, four children, Shelly (Steven) Finch, Deborah (Samuel) Piper, Teri (John) Berg-Engquist, David (Duska) Berg; Six Grand Children, Tiffany Piper, Stephanie Nelson, Amber Berg, Samantha Nelson, Austin Eckard, Bradley Nelson; and Seven Great-Grand Children. She was proceeded in death by and will be joined in Heaven with her parents, Laverne and Marian Peterson; a brother, Wayne Peterson; a sister Patricia Denver; Granddaughter, Ashley Berg; Grandson, Addam Fisk; Great Grandson, Marshall Fisk. A memorial service will be at 5:00 p.m. Tuesday, October 31, 2017 at Olson Funeral Home in Menomonie. Visitation will be from 4:00 p.m. to 5:00 p.m. prior to the service at the funeral home. In lieu of flowers memorials are suggested to the Alzheimer’s foundation in Shirley’s name.

Shirley Ann Berg, age 69, of Menomonie, Wisconsin, passed away peacefully on October 26, 2017 after a long battle with Alzheimer&#8217;s. She was born March 4, 1948 in Amery, Wisconsin and graduated from Unity High school in 1966. Shirley... View Obituary & Service Information

The family of Shirley A Berg created this Life Tributes page to make it easy to share your memories.