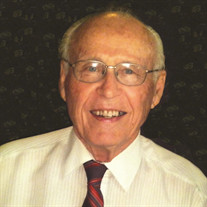 Dr. Sherman R. Lee, age 95, of Menomonie, WI, a much-loved family doctor, was called home on Saturday, January 28, 2017, from the American Lutheran Home as a result of Alzheimer’s. He was born at home on October 17, 1921, in Newfolden, MN. His parents decided to name him Steven Rollo Lee, until the delivering physician suggested they drop that name and use the much stronger name, Sherman Richard Lee. He spent his childhood in Newfolden and graduated from high school in 1939. Sherm attended Augsburg College in Minneapolis, the University of Minnesota embalming school, and worked as an embalming and funeral directing apprentice at McDivitt Funeral Home in Minneapolis. He enlisted in the Navy in 1942. Boot camp was at the Great Lakes Naval Training Station in Great Lakes, Illinois. Sherman was then assigned to the Marines and sent to Camp Elliott, CA, near San Diego. He proudly served as a medic in the South Pacific. While there, they set up a field hospital and took care of Marine casualties from the Bougainville Invasion. While serving, the officers saw in Sherman a natural talent and encouraged him to apply for the pre-med V-12 program at the University of Minnesota. He was chosen for the program. After completing the V-12 program, Sherman went to the Navy Hospital in Farragut, Idaho, to await entrance into the University of Wisconsin-Madison Medical School, where he earned his bachelor’s degree in 1947. The Dean of Medical School often called Sherman “General”, recognizing that his first and last names were those of opposing generals in the Civil War. In meeting his future bride in 1946, the first words Sherman uttered to Arlene Tonetta Midthun while picking up a jar at a student church supper was “Here…have a pickle.” Arlene said “No thanks.” He persisted. “How about a piece of cake?” Arlene said “No thanks, I’m not hungry.” Although Arlene rebuffed his offers of food, he was successful in striking up a conversation. After learning her first name and place of employment, he called Arlene at work where he knew she would answer the phone, since she was a switchboard operator. He married his beautiful bride on June 15, 1947 at Perry Lutheran Church in Daleyville, WI. Sherman continued his medical school training at the University of Wisconsin and completed internships in the areas of low income and public health care, TB hospitals programs, and other communicable disease outreach. He graduated from the University of Wisconsin-Madison Medical School in 1949. Sherman subsequently interned for a year at Luther Hospital in Eau Claire, WI, where he received a $25/month stipend while paying $35/month rent. Dr. Lee began his medical practice in Menomonie, WI in 1950, where he went to work at a clinic above Lee’s Drug Store that eventually became Menomonie’s current Mayo Clinic. Lee was a family practice doctor, the Dunn county coroner, and made old-fashioned house calls. When he retired in 1990, Sherman had delivered over 2,200 babies including 28 sets of twins. He loved being one of the willing volunteer doctors for the UW-Stout football team, especially when he could watch from the team bench. Also, while attending Stout’s men’s basketball games, the announcer would often call for a doctor in the stands after an injury, where Sherman would leave his seat to assess the players’ injuries. Dr. Lee’s professional life included serving on the Alcohol Problem’s Council of Wisconsin, which included speaking at senate committee meetings, schools, churches and camps. Sherman’s leisure time incorporated his Christian faith into many church activities including choir, church boards, teaching, Barbershop singing, walking in the woods and trimming trees with his beloved chainsaw, spending time in nature, hiking, and travel to Israel, Russia, the Cayman Islands, Norway, Sweden and Denmark. Sherman’s family life included camping and traveling adventures, ukulele strumming and singing around the campfire, outdoor activities, and showing their children every state in the union during their many motorhome trips. He and Arlene doted on their five grandchildren who continue to entertain, enlighten, and enhance their lives. Sherman’s strong Christian faith guided him throughout his lifetime. Sherman R. Lee is survived by his astonishingly dedicated wife of 70 years; children Shari Lee, Kristi Jonet (Bruce), Lynda Lee (Car), and Steven Lee (Sharon); grandchildren Nathaniel (Kristen), Angela (Caleb), Micah, Keira, and Sam; siblings Ivedell, and Prudence (David); and many beautiful and loving nieces and nephews. Preceded in death by parents Sam and Regina Mae, sisters Olive (Helge), Marie (Olger), Marguerite (John), infant brother Sanford, and brothers-in-law Herb Hokanson (Prudence) and Matt Keillor (Ivedell). Funeral services will be held Tuesday, January 31, at 11am at Oak Ridge Lutheran Brethren Church in Menomonie. Visitation begins at 9:30 am. Burial will be in Evergreen Cemetery in Menomonie with military honors by Menomonie Veteran Honor Guard. In lieu of flowers, memorials are preferred to Oak Ridge Lutheran Brethren Church.

The family of Dr. Sherman R. Lee created this Life Tributes page to make it easy to share your memories.