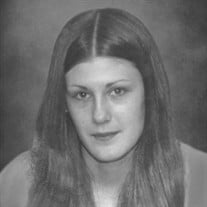 Shelly Ann Botscheller Stone, age 64, of Wheeler, WI passed away Thursday, April 14, 2022, at Lamb’s Creek Nursing Home in Boyceville, WI after a long hospital stay due to complications from Covid-19. She was born in the state of New York on December 8, 1957 and was raised in the state of Connecticut. She later joined the U.S. Army, and moved to California where she met her first husband Robert D. Birdsall Jr. They got married in 1980 and she gave birth to her first child, Christy Ann Birdsall in 1980 and later had her second child Audrey Ann Birdsall-DeMott. Shelly married William A. Stone Jr. in 1990 and gave birth to her youngest child, William A. Stone III in 1995. She moved to Volusia County, Florida in 2001, and lived there until 2017 when she came to Wisconsin to live with her daughter Christy. Shelly loved spending time with her children, and grandchildren very much. She loved having a beer in the warm sunshine, had a very crude sense of humor, and had a lot of fun going for drives and people watching. Shelly was a CNA for a large portion of her life, and she got very attached to her clients. She had a huge heart and would give the shirt off her back for anyone in need. Shelly survived by her daughter, Christy Ann Gray and son Billy Stone; grandchildren, Devon, Kylie, Dana, Brandy, Emma, Bethany, and Sophia; best friends Teresa and Kirstin; husband Bill Stone Jr.; sons-in-law Jeremy and Tom; and other relatives and friends. She was preceded in death by her daughter, Audrey Ann; parents Marcia and Anthony; brothers Michael, and Peter; former husband Robert and many others. A celebration of life will be held at a later date, when all of the family can get together. Her remains were divided between her two children Christy and Billy. Olson Funeral Home in Menomonie is serving the family. Shelly took a piece of our heart with us when she left. She will forever be missed. Forever in our hearts. Fly High Momma! May she rest easy, in paradise.

Shelly Ann Botscheller Stone, age 64, of Wheeler, WI passed away Thursday, April 14, 2022, at Lamb&#8217;s Creek Nursing Home in Boyceville, WI after a long hospital stay due to complications from Covid-19. She was born in the state of New... View Obituary & Service Information

The family of Shelly A. Botscheller Stone created this Life Tributes page to make it easy to share your memories.