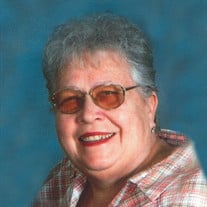 Sharry Lee (Wang) Bolle, age 78, of Menomonie, WI passed away Sunday, December 12, 2021 at MCHS-Red Cedar. Sharry was born January 9, 1943 to Marvin and Dorothy (Wolfe) Wang. She married Jerry Bolle October 29, 1960. They had three children. Sharry lived most of her life in the Menomonie and Downsville area. She stayed at home taking care of her “babies” until they were off to school. She began her cooking “career” at the Bolo Inn and was head cook for 26 years. After the Bolo closed, she cooked at other restaurants in the area. Sharry was a great cook, and we are grateful for all the delicious food she made with love. Sharry is survived by her husband, Jerry “Butch” of Menomonie, son Michael (Mary) Bolle of Chippewa Falls, daughters Loretta (Bruce) Fransway of Colfax and Brenda Hartung (Steve Marshman) of Arkansaw; grandchildren Nathaniel Melgaard (Whitney Korthof), Jerica (Joel) Meyer, Sophia Bolle, Alexander (Brianna) Bolle, and Bryce Fransway; great grandchildren Tori, Kaleb, Brock, and Amy Meyer. She is also survived by half-siblings Violet, Patricia, Rodney, Joseph, Peter, and Susan; sister-in-law Rayola Wang, and many nieces, nephews, and other relatives and friends. Sharry was preceded in death by her parents Marvin and Dorothy, stepfather Darrell Kistner, brothers Wayne Wang and William Wang and granddaughter Jessica Hartung. Visitation will be held from 11:00 a.m. to 2:00 p.m. on Saturday, December 18, 2021 at Olson Funeral Home in Menomonie.

The family of Sharry L. Bolle created this Life Tributes page to make it easy to share your memories.