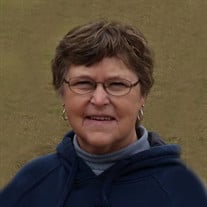 Sharon Marie Hansen Stender, age 71, of Colfax WI, earned her wings on May 1st, 2019 after a 12-year battle with cancer. Born in Henry SD, to Harold and Jeanette Hansen, Sharon was destined to be a educator and a lifelong learner. Sharon began her education journey as the top student in her elementary class of one. Fearing no challenge, Sharon went on to become valedictorian of her graduating class at Henry High School in 1965. Sharon completed her Undergraduate work at Northern State University and then continued to South Dakota State where she completed a Master’s Degree in English Literature. On June 7, 1970, Sharon married the love of her life, Chuck Stender, in Watertown, SD. Together they began their married life in Spearfish, SD where Sharon taught at Lead High School. After a short period, they moved to Thermopolis, WY, where Sharon worked as a Math and English teacher at Hot Springs County High School. During her time as a teacher, Sharon was active in many student organizations such Close-up and she was the Speech and Debate coach. In 1999, Sharon retired from teaching and moved to Custer, SD, for a short time and then onto Colfax, WI to be near their son, Matt and his children. While in retirement, Sharon kept busy in the Menomonie area working at the Westconsin Credit Union and volunteering at Stepping Stones Food Pantry. Sharon enjoyed spending time with her family, reading, traveling to her cabin near Lake Holcombe, and traveling to see her family and friends. Sharon’s true joy was her grandchildren. She loved passing down stories and traditions as well as teaching the next generation how to cook (including the art of making lefse), make tie blankets, and cross stitch. Sharon is survived by her husband Chuck, two sons, Matt (Becky) of Menomonie, and Scott (Stacy) active in the United States Coast Guard; six grandchildren, Tessa, Blaine, Aliyah, Tori, Colt and Jaxon; three siblings, Gary (Karen) Hansen, Milan (Linda) Hansen, and Tanis (Roosevelt) Hansen. She was preceded in death by her parents, and daughter-in-law Farrah Stender. A Memorial Service to honor Sharon’s life will be held at 11:00 a.m. Tuesday, May 7, 2019 at Olson Funeral Home in Menomonie with Pastor Bob Friese officiating. Visitation will be from 9:00 a.m. to 11:00 a.m. at the funeral home.

Sharon Marie Hansen Stender, age 71, of Colfax WI, earned her wings on May 1st, 2019 after a 12-year battle with cancer. Born in Henry SD, to Harold and Jeanette Hansen, Sharon was destined to be a educator and a lifelong learner. Sharon began... View Obituary & Service Information

The family of Sharon M. Stender created this Life Tributes page to make it easy to share your memories.