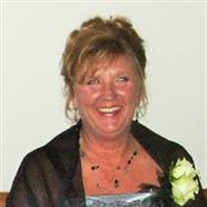 Sandra Jo Ivaska, age 55, of Menomonie, WI passed away Saturday, September 5, 2015 at the American Lutheran Home in Menomonie after a courageous 21 month battle with cancer. Sandy was born May 3, 1960 in Rhinelander, WI to Anthony and Dorothy (Tesch) Ivaska. She was raised in the Eagle River area where she grew up with her two older sisters. In 1979, Sandy graduated from Northland Pines High School. Shortly after high school she moved to the Hammond area where she gave birth to her two sons, Willy and Andy. She later moved to the Menomonie area and in 1991 she met Pete Turner the man she would spend the rest of her life with. Together Sandy and Pete enjoyed spending time at the cabin in Port Wing, camping, fishing, four wheeling and watching her kids play sports and spending time with her grandkids. Sandy waitressed at the Knapp House and enjoyed working for Bob and Todd Lechner as office manager at Midwest Stainless for many years and later Concept Tech. Sandy is survived by her loving companion Pete Turner; two sons, William (Sarah) Kurtz and Andrew (Heather) Kurtz; a step-son, Craig (Nikki) Turner; five grandchildren, Kaylynn, Joss, Kellen, Wesley and A.J.; her mother Dorothy Ivaska; two sisters, Anita (Glenn) Allen and Debbie (Pat) Kenny; also near and dear to her heart Lynn Ivaska as well as many other relatives and friends. She was preceded in death her father Anthony Ivaska. A Memorial Service will be held at 6:30 p.m. Thursday, Sept. 10, 2015 at Olson Funeral Home in Menomonie, with Pastor Leslie Walck officiating. There will be visitation from 4:00 p.m. until 6:30 p.m. on Thursday at the funeral home. Burial will be in Forest Hill Cemetery in the Town of Stanton, Dunn Co. WI at 10:00 a.m. Friday, Sept. 11, 2015.

Sandra Jo Ivaska, age 55, of Menomonie, WI passed away Saturday, September 5, 2015 at the American Lutheran Home in Menomonie after a courageous 21 month battle with cancer. Sandy was born May 3, 1960 in Rhinelander, WI to Anthony and Dorothy... View Obituary & Service Information

The family of Sandra J. Ivaska created this Life Tributes page to make it easy to share your memories.