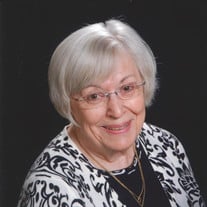 Ruth Elaine Gilbertson, age 92, of Menomonie, WI passed away Friday, December 3, 2021, at her home. She died peacefully, surrounded by her family, aided by Mayo Home Hospice Care. She had previously twice defeated cancer, but recently succumbed to an aggressive brain tumor. She was born February 15, 1929, near Arcadia, WI to William and Hilda (Dienger) Grotjahn. She grew up on a farm in the Arcadia area and graduated from Arcadia High School in 1948. Ruth earned her BA in Elementary Education from UW-Oshkosh in 1968, and received her Master's Degree in Professional Education from UW-Stout in 1984. She began teaching elementary school near Verona, WI in 1959, then taught at Stone Bank School System near Oconomowoc, WI, eventually teaching school in Menomonie at Lucas, Knapp, Cedar Falls, and North elementary schools from 1973 until her retirement in 1993. Ruth loved teaching and poured her heart and soul into instructing her students. One of her greatest joys was a yearly drama production in which she involved all of her students. Ruth had a big heart and gave generously of her time, volunteering for many worthwhile causes including the Menomonie Women's Club and Garden Club, was a founding developer of Kinship, belonged to the Philanthropic Educational Organization (PEO) and Red Hatters. In Florida, Ruth volunteered as a Beach Buddy, providing tourist information at Welcome Centers and airports. She volunteered at the local hospital and read to the blind on a regular radio show. She also participated in the Stephen Ministries program. Ruth married her high school sweetheart, Carlyle Gilbertson on August 30, 1951, at St. John's Lutheran Church in Arcadia. They celebrated their 70th wedding anniversary in August of 2021. Ruth cherished time with her family. She loved to entertain folks at her house in both Menomonie and Ft. Myers, FL. She enjoyed painting, playing cards, (especially Bridge), live theatre, dancing, and travel. She and Carlyle travelled extensively, visiting Spain, Norway, Germany, Italy, Singapore, Viet Nam, Bali, Mexico, Hawaii, Chile, and locations throughout the continental US. Ruth is survived by her husband, Carlyle Gilbertson of Menomonie; two children, Larry Gilbertson of Woodbury, MN, and Heidi Gilbertson, of Menomonie. She is also survived by her grandchild Sidney Gansberg of Menomonie; siblings Bonita Lorch of Eau Claire, Glenice Oines of Onalaska, Marlet Throndsen of Rockton, IL, Marvin Grotjahn (Noreen) of Eau Claire and Judy Hellman (Bob) of Neenah, many nieces, nephews, and other relatives and friends. She was preceded in death by her parents, William and Hilda Grotjahn, older brother Roy Grotjahn, daughter Kara Gilbertson, and son Michael Gilbertson. Funeral services will be held at 11:00 AM Wednesday, December 8, 2021, at Our Saviors Lutheran Church in Menomonie. Family and friends are invited to attend a visitation at the church beginning at 10;00 AM and a lunch following the service. Olson Funeral Home in Menomonie is serving the family. Memorial contributions may be made to The American Cancer Society, Stepping Stones of Dunn County, or a charitable organization of your choice.

The family of Ruth E. Gilbertson created this Life Tributes page to make it easy to share your memories.