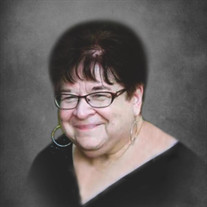 Ruby Esther (Blodgett) Clark was born August 31, 1947 in Menomonie, WI to Lucy (Peck) and Harvey Blodgett. On September 8, 2020, Ruby went home to be with our Lord and Savior Jesus Christ after complications from heart surgery. Raised on a farm in Boyceville, WI until her teenage years, she moved with her family to Menomonie, WI. Along with her parents she joined the Nazarene Church, where she met the love of her life in youth group. She graduated with Menomonie's class of 1965 and later that same fall, on Sep. 4, married her high school sweetheart, Roger Clark of Boyceville. While she and Roger owned and worked a farm between Boyceville and Menomonie for 32 years, they raised their children, known teasingly as the 6 T's, Ruby also kept busy by being a member of the Sherman Town Board for many years, she was also active in the Nazarene church and later the Faith Evangelical Free Church in Boyceville, as well as working at Korgers Decorating in Menomonie. When not busy with any of those, she loved to sew, bake, and cook for family and friends. Over the course of her life, she touched many lives in the communities she was proud to call home. She is preceded in death by her parents, brother Leo Hammond, sisters Lucille Krig and Joyce Krig, brothers in law Alan Clark and Peter Krig, nephew Kenny Erickson and niece Bethany Clark. She is survived by, her loving husband of 55 years Roger, their children, spouses and grandchildren Toni (Scott) Bixby of Menomonie with their daughter Miranda, Todd (Dana) Clark of Menomonie with their son Justin, Traci Rassbach of Boyceville with her daughters Natasha and Allexis, Travis (Jessi) Clark of Boyceville, Tiffany Clark of Boyceville with her son Isaac, and Taylor (Mandi) Clark of Eden Prairie, MN with their daughter Elizabeth, her sisters Audrey (Marvin) Samplawski and Shirley Tilseth, both of Menomonie, sisters in law Sandi Clark, Linda Ottle, Marilyn (Randy)Cueller, as well as many, many cousins, nieces and nephews. A private graveside gathering for immediate family is planned for Friday, Sep 18. A Celebration of Life will be held on Saturday Sep 19th at Faith Evangelical Free Church in Boyceville at 2:00pm with visitation an hour prior to the service. In lieu of flowers, the family is asking for donations to the American Heart Association or Faith Evangelical Free Church. *SOCIAL DISTANCING GUIDELINES AND FACIAL COVERINGS ARE RECOMMENDED, THANK YOU. Olson Funeral Home is serving the family.

Ruby Esther (Blodgett) Clark was born August 31, 1947 in Menomonie, WI to Lucy (Peck) and Harvey Blodgett. On September 8, 2020, Ruby went home to be with our Lord and Savior Jesus Christ after complications from heart surgery. Raised on a farm... View Obituary & Service Information

The family of Ruby E. Clark created this Life Tributes page to make it easy to share your memories.