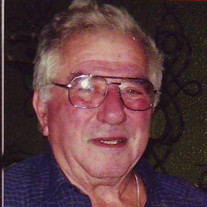 Royal M. Bowlin Sr., age 76, of Menomonie, WI passed away Thursday, Feb. 19, 2015 at Spring Valley Health and Rehabilitation. He was born July 10, 1938 in Eau Claire, WI to O. Keith and Grace (Cartwright) Bowlin. Royal graduated from Eau Claire High School in 1956 and from 1957 to 1960 he served with the U.S. Marine Corps. On May 14, 1960 Royal married Barbara Jean Fisher in Eau Claire. For five years Royal worked at Bunny Bread in Eau Claire. In 1972 he started working at Sanna Dairies in the Cameron plant transferring to Menomonie in 1980 where he retired in 2000. Royal was a member of the Knights of Columbus for many years, a member of the first Wisconsin Chapter of Muskie’s Inc. and the Wisconsin Wildlife Federation. He was one of the initial founders of the Dunn County Humane Society, which was operated out of their home. He did Basset Hound rescue for many years. Royal was an avid dog lover and always found a place to provide for them. He was an outdoorsman who loved hunting and Muskie fishing. He enjoyed gardening and did excellent woodworking. He also loved spending time with his family and loved to grill. His chicken and secret sauce will be missed. Royal is survived by his wife of 54 years, Barbara Bowlin; his children, Connie Hyland Espina, Valerie (John) Spanjers, Jennifer (Bill) Hewitt, Jacqueline Pack, Buddy (Tabitha) Bowlin; nine grandchildren; seven great-grandchildren; two brothers Damen and Beau Bowlin; a sister, Star Ries; many nieces and nephews; as well as other relatives and friends. He was preceded in death by his father, O. Keith Bowlin; mother, Grace Bowlin; sister, Dawn Bowlin; mother and father-in-law, William and Lucille Fisher; sisters-in-law, Nadine Bowlin, June Palahniuk, Luanne Johnson, Ruth Bowlin; and a nephew Thomas Fisher. There will be a Celebration of Life for Royal from 4:00 to 7:00 p.m. on Monday, Feb. 23, 2015 at Legends in Menomonie, with military honors by Menomonie Veterans Honor Guard at 5:00 p.m. Olson Funeral Home of Menomonie is assisting the family. In lieu of flowers the family suggests memorials to Dunn County Humane Society or Stepping Stones of Dunn County.

The family of Royal M. Bowlin Sr. created this Life Tributes page to make it easy to share your memories.