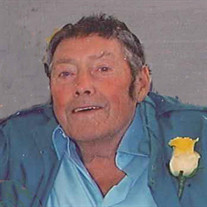 Roy William Lierman, age 74, went to be with his forgiving Lord on April 18, 2015. After 33 years of chronic pain and crippling disease, his heart gave out, surrounded by his loving family at Luther Hospital in Eau Claire, WI. He was born on May 7, 1940 to Martin and Vada (Denning) Lierman. Roy was baptized and confirmed at St. Paul’s Lutheran Church in Menomonie, where he was a lifelong member, serving on several boards. He attended school at Dunn County Aggie and later married the love of his life, Carol Claflin on April 30, 1960. They went dancing together every chance they had. They farmed Roy’s home farm since 1967 and built all new buildings there. Roy and Carol were blessed with five children of whom he instilled the importance of a deep faith and a Christian education. People always commented on his beautiful farm, but according to Roy, “God gave me this land, I just work it.” He loved his Allis tractors, farming, and helping his neighbors by doing custom fieldwork. As the years went on his arthritis got worse. It crippled his body, but not his attitude or personality. During this time he enjoyed doing work with his skid steer, feeding the beef, and mowing the lawn. The lesson that Roy taught us all is, “The only things you need in life are God and your family.” Roy is survived by his wife, Carol Lierman; his son, Tim (Pam) Lierman; daughters, Sandy (Jeff) Creaser and Marcia (Ron) Cutler; his grandchildren, Nicole (Chris) Potapenko, Josh Lierman, Jacoby Mattot, Brent (Nancy) Creaser, Dustin (Brooke) Creaser, Brian Cutler, Brittany Cutler (fiancé Steven Gerth); two great-grandchildren, Kinzey and Hartley Creaser; step-grandchildren, Jess (Jason) Traxler, Dan Holmberg and Cody (Kerri) Holmberg; step-great-grandchildren, Jadynn and Jace Traxler, Brielle and Brady Holmberg and Sawyer and Aubree Holmberg; his siblings, Tom (Soni) Lierman and Jean Hatalla; brother-in-law, Roger (Geri) Sipple; his in-laws, Kenneth (Ardeth) Claflin, Janet (Nolan) DeMarce, Linda (Will) Jeffrey, Roger (Ilene) Claflin and many nieces, nephews, cousins, other relatives and friends. He was preceded in death by his infant children, Terry and Pamela, his parents, Martin and Vada Lierman, his sister Ruth (Lierman) Sipple, and brother-in-law, Virgil Hatalla. Funeral Services will be held at 1:30 p.m. Friday, April 24, 2015 at St. John’s Lutheran Church (Hatchville), due to construction at St. Paul’s Lutheran Church. There will be visitation from 4:00 to 7:00 p.m. Thursday at Olson Funeral Home in Menomonie and at the church one hour prior to the service on Friday. Burial will be in St. Paul’s Lutheran Church Cemetery followed by a luncheon at St. Paul’s Lutheran Church School gymnasium in Menomonie. Map to church: https://goo.gl/maps/4fZ52 N4198 Co. Rd. P, Spring Valley, Wisconsin

Roy William Lierman, age 74, went to be with his forgiving Lord on April 18, 2015. After 33 years of chronic pain and crippling disease, his heart gave out, surrounded by his loving family at Luther Hospital in Eau Claire, WI. He was born... View Obituary & Service Information

The family of Roy W. Lierman created this Life Tributes page to make it easy to share your memories.

Roy William Lierman, age 74, went to be with his forgiving Lord...