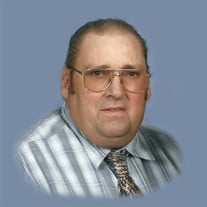 Roy Murle Kistner died on Monday, March 6, 2017 surrounded by family at Sacred Heart Hospital, Eau Claire Wisconsin. He was born on October 9, 1941 in Menomonie to Chester and Thelma (Dewey) Kistner. Roy attended school in Drummond, the little round school house in Downsville, and attended Menomonie High School. He was baptized and confirmed at New Hope Church in Downsville. Roy married Patricia Burnell on October 20, 1962. To this union was born one daughter, Kathleen (Michael) Klingenberg and twin sons; Brian (Shelly) and Bruce (Lori). After marriage Roy began to work at Fehr Concrete where he spent 41 years at the same plant. Roy enjoyed spending time with his family. He enjoyed fishing, camping, hunting, and anything outdoors. He was especially proud of the place up north in Minong where he enjoyed watching his deer, bear and hummingbirds. He is survived by his wife of 54 years, his children, three grandchildren; Benjamin (Kyle) Klingenberg, Samantha (Jeremy) Dekan, and Emily (Abby) Klingenberg; three great grandchildren; Dominik, Hunter, Emma Dekan and one due in April. He is also survived by his siblings; Gerald Kistner, Elaine Hilmanowski, Roland (Millie) Kistner, Clair (Lovine) Kistner, Charles (Connie) Kistner, Gale (Jackie) Kistner and numerous nieces, nephews and cousins. He was preceded in death by his grandparents, parents, one brother Delbert, three sisters-in-law; Beverly Kistner, Corine Kistner and Margaret Kistner. The family would like to express their deepest gratitude to Dr. Delmastro, the entire Marshfield Cancer Center, and to Dr. Durkee for their loving care for the last 15 years. Memorial service will be held at 12:00pm noon, Saturday March 11, 2017 at Barum Lutheran Church, Elk Mound, Wisconsin, with Pastor Hal Schroetter officiating. There will be a visitation at the church from 10:00am until time of service on Saturday. Olson Funeral Home of Menomonie is serving the family.

The family of Roy Murle Kistner created this Life Tributes page to make it easy to share your memories.