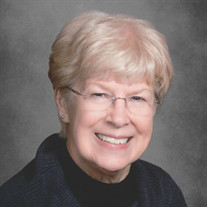 RoseAnn Husby Loving wife, mother, grandmother and friend, RoseAnn Husby passed peacefully into heaven Thursday, April 7, 2022. RoseAnn was born January 19, 1947 in Adrian, Minnesota to Lloyd and Beth Smith. Spending most of her childhood in South Dakota, she graduated from high school in Sioux Falls, South Dakota in 1965. Following in her mother’s footsteps, she sought a degree in education from UW-Eau Claire. While there, her friend Paula introduced her to her future husband, Louis Husby, who was attending UW-Stout at the time. Louie and RoseAnn were married at Our Savior’s Lutheran Church in 1972; June 10th of this year they would celebrate their 50th wedding anniversary. RoseAnn lived a very full and active life in 75 years. In addition to teaching elementary school in Menomonie, she also enjoyed playing softball on a league for The Spot Bar, which she and Louie owned for a few years. Not long after, RoseAnn stopped teaching to raise her children. She and Louie moved out to the farm on County Road P in 1980. RoseAnn never thought she would be a farmer, but it grew to be something she really loved. She worked hard alongside her husband doing farm chores, managing the bookwork, cattle, and growing a big garden. RoseAnn went back to school for her Education Specialist degree from UW-Stout. She was a guidance counselor at Barron Elementary School for many years. During this time and into her retirement, she stayed active doing volunteer work at church, yoga and Strong Bones classes, taking art classes in painting, two book clubs, traveling, baking, and active membership in both a sorority and Homemaker’s. She also loved attending her grandchildren’s activities and sports. She will be lovingly missed by her husband Louis; her daughters Heather (Jordan) Vogel, Tiffany (Jeff) Jaeger, and son Mark (Denise) Husby; grandchildren Camdyn, Caelyn and Cohley Vogel; Maxwell, Bennett, Caleb and William Jaeger; Hayleigh and Tanner Husby. She will also be missed by her family including all the members of the Smith and Husby families and by her many friends from church, school, book club, sorority and homemakers. She was preceded in death by her parents Lloyd and Beth Smith, and infant brother Brian. She was also preceded in death by her Father and Mother in-law Marvin and Adelia Husby; brother-in-law Marvin Husby II; sister-in-law Margaret (Husby) Rollay as well as several extended family members including cousins. The family would like to thank Mayo Clinic of Menomonie and Rochester, Caregiver Lisa, Our House staff, and Moments Hospice for their care of RoseAnn. A Memorial Service will be held 11:00a.m. Thursday April 14, 2022 at Our Saviors Lutheran Church in Menomonie, WI with Pastor Heather Wigdahl officiating. Visitation will be Wednesday from 4:00-7:00p.m. at Olson Funeral Home in Menomonie, WI and also one hour prior to the service at the church. In lieu of flowers, a memorial can be made in her memory to a charity of your choosing.

The family of RoseAnn Husby created this Life Tributes page to make it easy to share your memories.