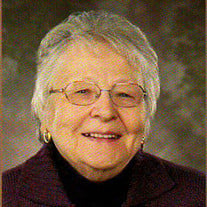 Rose L. (Gempeler) Lee, age 79, of Menomonie died peacefully at home surrounded by her loving family on Saturday Nov. 15, 2014. Rose was born May 31, 1935 in Loyal, WI to Werner and Emma (Bartlome) Gempeler. They lived above a cheese factory in Loyal that her dad owned for 14 years. Later they moved to a home outside of Loyal. Rose graduated from Loyal High School. She then went on to nurse’s training at Luther Hospital School of Nursing in Eau Claire and graduated in June 1956. Rose married Harold Lee on Aug. 31, 1957 in Eau Claire. After graduating as a nurse, she then worked at Luther Hospital in the Obstetrics Department for a year and a half. Rose took the next 12 years off to raise her kids. During those 12 years off, they lived in Osseo for two years, Barron for nine and a half years, and then moved to Menomonie. Rose went to work at the American Lutheran Home in January 1970. She worked there for nine and a half years, then took three months off and started work at Memorial Hospital. Four months after Rose started there, they moved to another location and became Myrtle Werth Medical Center. Rose worked in medical surgery for 20 years and then went to Day Surgery for six years. In all of Rose’s years of being a nurse, she loved every minute of it. Rose’s nursing career spanned almost 50 years. Rose loved watching ball games. In the spring and summer she watched softball and baseball. In the fall she watched football and volleyball and in winter she watched basketball. Rose enjoyed watching anytime, but especially when her grandchildren were playing. Rose loved to do crossword puzzles. She did them daily in the newspaper. She also enjoyed cross-stitching in earlier years. Rose was active in volunteering at Christ Lutheran Church in Menomonie. She was a member of the CLCW Quilting Group and also helped out with the Sunshine Group. Rose often helped take care of the homebound elderly. She was a volunteer at the Mayo Clinic Health System. Rose was recognized for dedication and service to the medical center, its patients and the community. Rose is survived by a son, Bob (Julie) Lee of Menomonie; three daughters, Sharon (Steve) Wayne of Chippewa Falls, Janet (Kevin) Shoemaker of Menomonie and Joanne (John) Bentz of Viroqua; 10 grandchildren, Jordan (Brenda) Lee, Trenton Lee, Afton (Michael) Roemhild, Eric (Trinity) Wayne, Mathew (Deanna Metcalf) Wayne, Cory Wayne, Nate (Miranda) Wayne, Megan Shoemaker, Amanda Bentz and Tyler Bentz; six great-grandchildren, Cadence, Carter, Casen and Camden Lee and Peyton and Trysta Wayne; a brother Erwin Gempeler of Richfield; a sister Katherine Nell of Brookfield; and a brother-in-law James (MaryAnn) Lee of Clearwater, FL. And also survived by nieces and nephews and many Swiss relatives. She was preceded in death by her husband Harold Lee; her parents; a sister-in-law Lila Lee; a brother-in-law Stan Coffin; sister-in-law Marion Coffin; and a brother-in-law Gerald Nell. Funeral services will be held at 1:00 p.m. Thursday at Christ Lutheran Church in Menomonie with Pastor Geoff Scott officiating. Burial will be in Christ Lutheran/Halvorson Cemetery in Menomonie. There will be visitation from 4:00 to 8:00 p.m. Wednesday at Olson Funeral Home and at the church one hour prior to the service on Thursday. Olson Funeral Home of Menomonie is serving the family. Memorials are suggested to American Red Cross, Mayo Clinic Hospice or the MHS Sports Complex

Rose L. (Gempeler) Lee, age 79, of Menomonie died peacefully at home surrounded by her loving family on Saturday Nov. 15, 2014. Rose was born May 31, 1935 in Loyal, WI to Werner and Emma (Bartlome) Gempeler. They lived above a cheese factory... View Obituary & Service Information

The family of Rose L. Lee created this Life Tributes page to make it easy to share your memories.