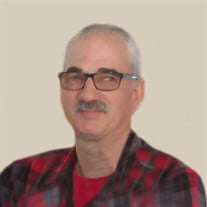 Ronnie P. Coleman, age 64, of Menomonie, WI died unexpectedly in his sleep on Wednesday, April 25, 2018 at his home. He was born October 14, 1953 in Menomonie, Wisconsin to Lee and Gloria Coleman-Larrabee. At age 7, he moved the Minneapolis area, where he lived until he enlisted in the Army. Ron married Patricia Ferguson in 1972. Shortly thereafter, they were stationed at Fort Lewis, Washington followed by Fort Greely, Alaska where he completed his military service. Ron and Pat were blessed with four children and six grandchildren. Ron worked for CATCO/FleetPride for forty years in the St. Paul, Ellsworth, Burnsville and Eau Claire stores. Ron held several positions with the company over his career such as mechanic, transmission specialist, ReMan Center store manager, Service Manager and Parts Lead. Throughout his career, he was an exemplary employee and mentor to those he worked for and with. Ron was known for his technical expertise, laid back personality and sense of humor. Ron enjoyed a good clean joke. ATVing, camping, kayaking and cabin time were among his favorite pastimes. He also enjoyed tinkering in the shed, spending time with family and friends, and ending the day on the porch swing with Pat and dog Fergie. Throughout his adult life, Ron was faithful and active in his belief in Jesus Christ as his Savior and lived his life in testament to his beliefs. He had an impact on everyone he met in so many different and wonderful ways. He will be greatly missed and although his passing will leave a void in the lives of those who love him, we know he has gone home to be with the Lord and we will see him again someday! Ron is survived by his wife Patricia, three children, Robin (Jonah) Johnson, Carrie (Jake) Hustad and Andrew Coleman. He is also survived by six grandchildren; Jasmine, Emily, Zoe Johnson, Corbin, Sadie and Cole Hustad and beloved dog Fergie. He is further survived by his siblings: Robert (Sharon Lee), Roger (Diane), Rueben (Darlene), Mary (James) Meyer, Rollie (Susan), Marlys (Arnold) Larson, Maureen (Michael) Newville, Melody (Michael) Fraser, Michelle Coleman, Reginald (Beth) and sister-in-law Diane (Ramon) as well as numerous nieces, nephews, great nieces and nephews, and other relatives and friends. He was preceded in death by his parents, his son Aaron, and his brothers, Richard, Rand, and Ramon and sister-in-law Terrie (Rollie); also in-laws, Clarice Ferguson and Edwin and Sue Ferguson. Funeral services will be held at 11:00am, Monday, April 30th at Immanuel Baptist Church in Menomonie, WI. Burial will be in Forest Center Cemetery in the Town of Springbrook, with military honors by Menomonie Veterans Honor Guard. Visitation will be from 3:00-6:00pm Sunday at Olson Funeral Home in Menomonie and one hour prior to services at the church on Monday.

Ronnie P. Coleman, age 64, of Menomonie, WI died unexpectedly in his sleep on Wednesday, April 25, 2018 at his home. He was born October 14, 1953 in Menomonie, Wisconsin to Lee and Gloria Coleman-Larrabee. At age 7, he moved the Minneapolis... View Obituary & Service Information

The family of Ronnie P. Coleman created this Life Tributes page to make it easy to share your memories.