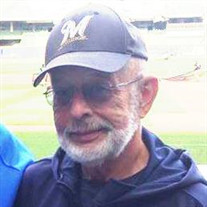 Ronald J. Mrdutt, age 73, of Boyceville, died Monday, August 17, 2015 at Mayo Clinic Health System in Eau Claire after a two+ year battle with cancer. Ron was born October 7, 1941 in Chicago, IL to Joe and Irene (Halama) Mrdutt. He was welcomed to the family by a sister, Betty. At an early age the family moved to Boyceville, where his parents and grandparents were from. Ron attended school in Boyceville and also Stout State University. He was active in high school football, basketball, softball, and the youth activities at his church. He continued with sports as an adult with softball, bowling, and golf. His work history included a venture to Chicago where he worked at a factory for a year before returning to Wisconsin, a garbage route in Boyceville, hauling milk with his brother-in law, hanging around and working at the Ford garage and Dick’s Body Shop in Boyceville where he learned to fix and paint cars. While working at Hamm’s Brewing in St. Paul, he was drafted into the Army and served two years (’64-‘66)- receiving the Good Conduct Medal, Vietnam Service Medal, and Expert Badge (Rifle M-14) Award. Ron was proud to be a Veteran and always said he wouldn’t want to change his Army experience or service in Vietnam. He returned to Hamm’s after the Army and then moved on to Mpls Bee Line Company, which did auto frame straightening, saying he wanted to get his hands dirty again. In 1967 Ron married Mary Jo Gulickson at Barron, WI and they moved to Boyceville, where they have lived since. He worked at various auto repair shops in the area until he established Ron’s Body Shop in the early 1970’s and was open for business until retirement and ill health forced him to close in 2012. He repaired and painted autos, trucks, race cars, pedal cars, Coke coolers, mail boxes and even a casket damaged in shipping. He enjoyed hunting, fishing, and especially trips to Colorado and Canada with his son. On the weekends since 1974 you could find Ron 90 miles north of Boyceville at their cabin in Minong, WI where friends and family were often greeted with a cold beer and a campfire. Throughout Ron’s two year struggle with cancer, his chemo nurses were the highlight of his treatment and he thought they should get awards for the work they do every day. Ron is survived by his wife, Mary Jo; daughter Stacey (Reedsburg, WI); son Jim (Solon Springs, WI); four-legged family of Seaver, Sadie, and Willow; sister Betty Wisemiller (Arlen) of Boyceville, sister-in-law Elaine Tireman of Barron; nieces and nephews Lori (John) Bekkum , Randy (Brenda) Wisemiller, Chris (Lynette) Wisemiller, Tim (Penny) Wisemiller, Bethany (Chris) Novotney, Bruce (Bonita) Subrt, Lisa Olson, Kevin Olson, and Thea McCrossen; great and great great nieces and nephews, cousins and friends. A memorial service will be held at 3:00 p.m. Friday, August 21, 2015 at Holy Trinity Lutheran Church in Tiffany Township, Dunn County, with Pastor Curtis Brooks officiating. Burial will take place at Tiffany Cemetery in Boyceville with military honors by the Harmon Harris Legion Post 314. Visitation will be from 1:00 p.m. to 3:00 p.m. at the church. A gathering of friends and family will be held at the Stout Ale House in Menomonie after the burial.

The family of Ronald J. Mrdutt created this Life Tributes page to make it easy to share your memories.