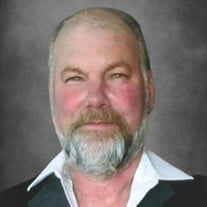 Ronald A. Metzger Ronald A. Metzger, age 59, of Boyceville, WI passed away unexpectedly on Tuesday, February 22, 2022. Ron was born December 28, 1962 to Richard Metzger and Barb (Holden) Mathiesen in Menomonie, WI. He spent his childhood on his Grandma and Grandpa’s farm near Irvington, playing outside and building things. He attended both Menomonie and Boyceville High Schools, where he excelled on the wrestling team. He married his high school sweetheart Daneen Poach on May 8, 1982. The two of them settled on a hobby farm near Connorsville, WI where they raised three children and many animals. Ron worked as a tire man in New Richmond for many years. He later started working at St. Croix Truck and Trailer, hauling heavy equipment, and Herdsman Feeds, hauling grain. Ron was an active member of the Boyceville Lions Club, helping to construct a new playground in Pafko Park. Ron will always be remembered for just how much he helped others, from family to friends to complete strangers, he was the first to lend a hand. Ron was best described as hardworking and selfless, with a love for building and fixing things. He enjoyed camping with loved ones, motorsports, farming, working on the house with Susan and spending time with family and friends. Ron is survived by his daughter Shantel (Mitch), his son Cody, his daughter Danielle, his four grandchildren; Micah, William, Weston and Cole, the love of his life Susan, his inherited 4 children and 7 grandchildren, his mother Barbara, his father Richard (Leona), his sisters Anna (Dale), Melanie (Tod), Jennifer (Jason), his brother Timothy (Niki), and many nieces and nephews. He is preceded in death by his grandparents Arthor and Betty Holden, George and Nellie Metzger, Ray and Mabel Mathieson, mother and father-in-law Shirley and Donald Poach Sr. and step-father John Mathiesen. A Memorial service will be held at 11:00 a.m. on Tuesday, March 1, 2022, at Olson Funeral Home in Menomonie, WI with Pastor Brad Peterson officiating. There will be a visitation one hour prior to the service. Burial will be at St. Paul’s Lutheran Cemetery in Menomonie in the spring.

Ronald A. Metzger Ronald A. Metzger, age 59, of Boyceville, WI passed away unexpectedly on Tuesday, February 22, 2022. Ron was born December 28, 1962 to Richard Metzger and Barb (Holden) Mathiesen in Menomonie, WI. He spent his childhood on... View Obituary & Service Information

The family of Ronald A. Metzger created this Life Tributes page to make it easy to share your memories.