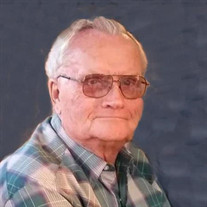 Ronald E. Husby, age 91, of Menomonie, WI passed away Thursday, Feb. 18, 2021 at Mayo Clinic Health System in Eau Claire, WI. He was born Dec. 11, 1929 in the Town of Lucas, Dunn Co. WI to Earl and Mary (Butteris) Husby. Ron graduated from Menomonie High School in 1948 and then served two years in the U.S. Army in Germany. On Oct. 16, 1953 Ron married Correne Maves in Menomonie. Ron was manager of the Gamble’s Store in Menomonie, had a Snowflake Food Route for several years before becoming a salesman for Gould Battery that had the family moving to several different states. In 1974 he purchased Churchill Tire and Battery from his uncles, Marv and Norm, and was involved in the business until his passing. Ron was a longtime member of the Menomonie Lions Club. He was a Melvin Jones Fellow and Birch-Sturm Fellow, President of the Wisconsin Lions Foundation and Past District Governor of District 27-E2. He had been a member of Jaycees and the V.F.W. Ron was also a lifelong member of Our Savior’s Lutheran Church. He was passionate about his gardening and also enjoyed traveling for Lions Club events where he made many new friends. Ron is survived by his two sons both of Menomonie, Rodney (Joan) Husby, Steve (Peggy) Husby and daughter Kim (Bill) Wassik of Terryville, CT; nine grandchildren, Sharon Husby, Nick (Crystal) Husby, Matthew Husby, Brady Husby, Jordon, Jacob, Benjamin, Courtney and Kaitlin Wassik; three great-grandchildren, Katherine, Sapphira and Declan Husby; brothers and sisters, Vaughn (Janet) Husby, Mick (Ann) Husby, Kathie Skillings all of Menomonie and Jim (Jan) Husby of Altoona; also survived by nieces, nephews, other relatives and friends. He was preceded in death by his parents; his wife Correne; brothers and sisters, Shirley Jean Nelson, Carole Stratton, Bill Husby, Maryruth Dahms, Joan Myers and John Husby. Private Funeral Services will be held at 11:00 a.m. Tuesday, Feb. 23, 2021 at Our Savior’s Lutheran Church in Menomonie, with Pastor Heather Wigdahl officiating. The service will be livestreamed at www.facebook.com/OlsonFunerals . There will be public visitation from 4:00 to 7:00 p.m. Monday at Olson Funeral Home in Menomonie. Burial will be in Mamre Cemetery in the Town of Menomonie, Dunn Co. WI with military honors by Menomonie Veterans Honor Guard in the spring.

The family of Ronald E. Husby created this Life Tributes page to make it easy to share your memories.