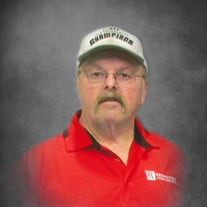 Ronald (Ron, aka “Chevy”) Ford, age 68, of Menomonie, WI passed away Tuesday, April 13th with his family by his side after a strong battle with COVID. He was born in Menomonie in 1953 to parents Clarence and Marian (Greene) Ford and graduated from Menomonie High School in 1971. He married Pamela Jean Halverson in 1980. Ron enjoyed watching the Green Bay Packers, Wisconsin Badgers sports, hockey of all levels, and Menomonie High School sports, especially his granddaughter playing basketball. Ron started playing dartball at age 13 with his father Clarence. He played in dartball leagues for more than 50 years and was inducted into the Wisconsin Dartball Hall of Fame in 2018. Ron also played softball for more than 30 years in bar leagues and weekend tournaments throughout Wisconsin. Ron was a fan of rock music and attended Rockfest for many years. His favorite band to watch was Hairball, for their awesome performances and costume changes for each act. One of Ron’s greatest joys in life was his granddaughters. He had a smile on his face every time they were together. Ron is survived by his mother Marian, wife Pam, sons; Eric and Justin (Jen), grandchildren; Sienna and Teagan, four brothers; Larry, LaVerne, Gerald, and Terry and three sisters; Diane, Carol, and Geraldine. He was preceded in death by his father Clarence, brothers-in-law; Dennis Kaiser and Roger Miller, parents-in-laws; Clarence and Pat Halverson, and beloved dog Scrappi. A visitation will be held from 4:00 to 7:00 p.m. Monday, April 19, 2021 at Olson Funeral Home in Menomonie, WI. There will be a private funeral service at 11:00 a.m. Tuesday, April 20, 2021 at the funeral home with Pastor David Ford officiating. Burial will be in Ford Cemetery in the Town of Menomonie, Dunn Co. WI. The service will be livestreamed at www.facebook.com/OlsonFunerals. The family would like to invite everyone to Dean and Sue’s following the service.

Ronald (Ron, aka &#8220;Chevy&#8221;) Ford, age 68, of Menomonie, WI passed away Tuesday, April 13th with his family by his side after a strong battle with COVID. He was born in Menomonie in 1953 to parents Clarence and Marian (Greene) Ford... View Obituary & Service Information

The family of Ronald D. Ford created this Life Tributes page to make it easy to share your memories.