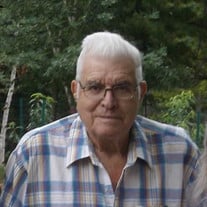 On Friday February 14th, 2020, Roland “ACE” McMahon, Loving Husband, Father and Decorated Marine passed away at the age of 91. “Ace” was born on September,2, 1928 in Eau Claire, WI. To Howard and Tressie Simonson as the 4th child of 11. He served 4 years with the Marine Corp. in Korea where he received the Bronze Star and went on to serve 16 years in the Navy before retiring as a Senior Chief. He then purchased his wife’s family farm in Eau Galle, WI. Where they farmed from 1974 until 2018. He married Margaret “Mardy” Emma Schmutz on November 8th, 1952. They raised four daughters Marilyn, Janet, Sharon and Susan. “Ace” had a love for the land and Bluebirds, in addition to raising general crops he raised pigs until the storm of 1980 collapsed the barn. He and Mardy raised produce for local stores and neighbors. Every spring he would clean and repair the multitude of bluebird house’s that he placed throughout the surrounding area. Ace also frequented several local coffee shops in the surrounding communities to socialize with friends and neighbors. He is survived by his wife Mardy, his four daughters, Marilyn and (Phil Thompson), Janet and (Roger Lyson), Sharon and (Lyle Moritz) and Susan and (Dave Zuberbuehler), his sisters, Lucille, Lavonne, Theresa “Sue” and Linda along with brothers Gary, Dave. Funeral services will be held at 11:00 a.m. Friday, Feb. 21, 2020 at Olson Funeral Home in Menomonie. There will be visitation at the funeral home from 4:00 to 7:00 p.m. Thursday and one hour prior to the service on Friday. A lunch will follow the service. Burial will be in Rose Hill Cemetery in the Town of Dunn, Dunn Co. WI with military honors by Menomonie Veterans Honor Guard.

The family of Roland "Ace" McMahon created this Life Tributes page to make it easy to share your memories.