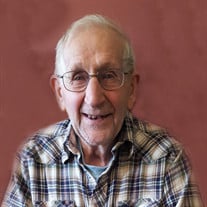 Roger Martin Pittman, age 86, of Menomonie, WI, passed away on March 16, 2018. His last days were spent at The Neighbors of Dunn County under the care of St. Croix Hospice. He was born November 14, 1931 in Arkansaw, WI to Edward William and Margaret Anna (Bates) Pittman. Roger was the youngest of five children. He grew up on his parents’ farm in the Little Arkansaw Valley and attended Liddy School and Arkansaw High School graduating in 1950. He worked on the family farm after high school, before being drafted into the Army during the Korean Conflict. After being trained as a plumber at Fort Leonard Wood, MO, he served his Country in France from 1952-1954. Upon being honorably discharged, he returned home to Arkansaw and continued to work on the family farm. On May 20, 1958, Roger married Christie Lou Helmueller at St. Henry’s Catholic Church, in Eau Galle, WI. Roger and Christie farmed with his brothers until 1959 when they purchased a 250 acre dairy farm near Weston, WI, where they raised their seven children. He and Christie lived there until May of 2016 when they moved to their apartment in Menomonie, WI. Roger loved working and living on the farm. He enjoyed playing cards, putting puzzles together, feeding the birds, and growing plants with his green thumb. The twinkle in his eye, his gift of gab, witty sayings and his playful nature won the hearts of his grandchildren and friends. Roger is survived by his loving wife, Christie, of 59 years; His seven children, Sue (Tim) Haroldson, Eau Claire, WI; Bonnie (Mike) Krueger, Plover, WI; Jerry Pittman, Menomonie, WI; Rita (Mark) Devery, Menomonie, WI; Karen (Dan) Kositzke, Pleasant Prairie, WI; Audrey (Bob) Stabenow, Wheeler, WI; Amy (Don) Gjestson, Knapp, WI. He is also survived by 13 special grandchildren; Jenna (Benji) Siverling, Matthew Haroldson, Andy and Brian Krueger, Melissa (special friend Casey) and Ryan Devery, Katie and Joey Kositzke, Tim and Tina Stabenow, and Derek, Sara Jo, and Austin Gjestson. He is further survived by his sister-in-law, Rose Pittman, of La Crosse and brothers-in-law, Gary Lauer, of Eau Galle, WI, Bernard (Patty) Helmueller, of Summerville, SC, Charlie (Rose) Helmueller, of River Falls, WI, and many nieces, nephews, relatives, and friends. He was preceded in death by his infant son James, his parents, Edward and Margaret, father and mother-in-law, Chris and Johanna Helmueller, his brothers, Henry, Lewis, Claire, and Robert Pittman, and sisters-in-law, Vera and Helen Pittman, Betty Lauer, and Delores Pittman. A celebration of Roger’s life will be held on Friday, March 23, 2018, at 11:00 a.m. at St. Joseph’s Catholic Church in Menomonie with Fr. James Kurzynski officiating. Military honors will be conducted by Menomonie Veterans Honor Guard. Burial will be in St. Henry’s Catholic Cemetery in Eau Galle. There will be visitation one hour prior to services at the church. Olson Funeral Home in Menomonie is serving the family.

Roger Martin Pittman, age 86, of Menomonie, WI, passed away on March 16, 2018. His last days were spent at The Neighbors of Dunn County under the care of St. Croix Hospice. He was born November 14, 1931 in Arkansaw, WI to Edward William... View Obituary & Service Information

The family of Roger M. Pittman created this Life Tributes page to make it easy to share your memories.

Roger Martin Pittman, age 86, of Menomonie, WI, passed away on...