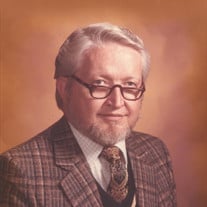 Roger D. Natwick, age 86, of Menomonie, WI passed away Thursday, March 7, 2019 at his home with hospice. Roger Natwick was born December 12, 1932 to George and Mabel Natwick in Buxton North Dakota. He graduated from high school in Buxton and then went on to earn a degree in medicine from the University of North Dakota. He continued his education at Tufts University in Boston, Massachusetts where he obtained his doctorate of medicine. He and his family moved to Akron, Ohio where he pursued his internship and residency in surgery. Following the completion of his residency he moved his family to Menomonie Wisconsin where he became the first and only surgeon in Dunn County at the time. He was well known and loved by many in the Menomonie area for the kind of care that he gave people. Roger’s passion for people and his love for the Lord were the trademarks of who he is and was. One of his favorite passages in scripture is 1 Corinthians 15:54-55, “But when this perishable will have put on the imperishable, and this mortal will have put on immortality, then will come about the saying that is written, ‘Death is swallowed up in victory. O death where is your victory? O death, where is your sting?” Roger was preceded in death by his parents, his two sons David Allen Natwick and Paul Eric Natwick. He is survived by his precious wife of 63 years, Joanne Marie Fagstad Natwick, his son Joel Thomas Natwick and daughters-in-law, Tammy Lou Natwick, Dana Natwick and Karen Russel, brother Casey Natwick, as well as ten grandchildren. The Lord, his family and people, were the focus of his life. He las left a powerful legacy that will carry through to many generations. Funeral services will be held at 11:00 a.m. Wednesday, March 13, 2019 at Menomonie Alliance Church with Pastor Don Wiggins officiating. There will be visitation at the church one hour prior to the service. Burial will be in Evergreen Cemetery in Menomonie at a later date. Olson Funeral Home in Menomonie is serving the family.

Roger D. Natwick, age 86, of Menomonie, WI passed away Thursday, March 7, 2019 at his home with hospice. Roger Natwick was born December 12, 1932 to George and Mabel Natwick in Buxton North Dakota. He graduated from high school in Buxton and... View Obituary & Service Information

The family of Roger D. Natwick created this Life Tributes page to make it easy to share your memories.