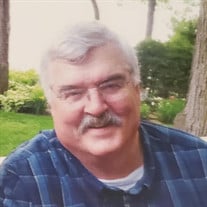 Roger D. Braker, age 73, of Menomonie, WI passed away, peacefully of complications due to Covid Pneumonia, Monday, November 29, 2021, at Mayo Clinic Health System-Red Cedar in Menomonie. He was born May 23, 1948, in Menomonie, WI to James Douglas and Mary Ellen (Cranston) Braker. He grew up in the Menomonie area and graduated from Menomonie High School in 1966, where he was a valued member of the football team and wrestling squad and was later the first inductee to the Menomonie High School Wrestling Club Hall of Fame (2019). After graduating from Menomonie, he went on to attend Kilgore Jr. College in Kilgore, TX to study business where he and his football team were inducted into the Kilgore, TX football hall of fame. Roger married Victoria “Vikki” Hanson June 12, 1976, at the historic Menomonie Methodist Church on Wilson Avenue in Menomonie, WI. Together, they lived in Cedar Falls, WI, just outside of Menomonie, and worked for the family business, Doug and Mary’s Resort, on Tainter Lake. After selling the family business Roger became a bus driver and was very much loved by all of the children he enjoyed driving to school every day. Roger’s pride and joy was his wife and family as well as watching his grandchildren’s sporting and school events. Roger also enjoyed watching his beloved Green Bay Packers. Roger is survived by his wife, Vikki of Menomonie; his children, Renee’ (Dan) Geving of New Richmond, WI, James (Crystal) Braker of Elk Mound, WI, and Brett Braker (Megan Roemhild) of Elmwood, WI; his five grandchildren, Allie and Tori Geving (Renee’ and Dan), McKenna and Joshua Braker (James and Crystal), and Axzel Braker (Brett and Megan). He is also survived by many loving nieces, nephews and other relatives and friends and his dog Lilly. He was preceded in death by his parents, James Douglas and Mary Ellen; his grandparents, James and Bida Lou Braker and Frank and Ruby Cranston; his grandson Tyler Geving, and his niece Shaina Braker, along with many other loved relatives and friends as well as his cat Autumn. There will be visitation from 1:00 p.m. to 4:00 p.m. Sunday, December 19, 2021, at Olson Funeral Home in Menomonie, WI.

Roger D. Braker, age 73, of Menomonie, WI passed away, peacefully of complications due to Covid Pneumonia, Monday, November 29, 2021, at Mayo Clinic Health System-Red Cedar in Menomonie. He was born May 23, 1948, in Menomonie, WI to James Douglas... View Obituary & Service Information

POSTPONED: Due to weather, family has requested to postpone visitation for a later date.