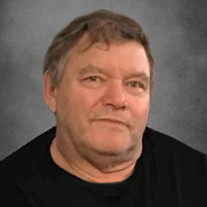 Rodney Allen Lueck “Crazy Ike” On April 8, 2022, Rod A. Lueck (1951-2022) got his eagle wings and is flying home. Rod grew-up in Bloomer, WI and he was a 1969 graduate of Bloomer High School. Rod had many talents that he pursued throughout his lifetime which were welding, masonry without using a level, master canner and gardener to name a few. Activities he never got enough time to do were hunting and fishing. During his working years he worked at Packerland Packing in Chippewa Falls, a dairy farmer in Bloomer and later a real estate broker. In retirement Rod was called the ‘wheelchair lumber-jack’ harvesting logs off his property and cutting up firewood for the winter heating season. Rod was an avid Green Bay Packer fan with a new interest in Formula 1 racing. For the past 25 years, Rod volunteered in the Annual Midwest Crane Count in Wisconsin. Twenty-four years ago Rod got married to the woman of his dreams, Penne M. Freyberger. They have enjoyed doing birding, seed saving, gardening and biking using his three-wheel bicycle that he propelled by his arms. The longest distance that Rod biked in one day on his arm bike was 40 miles on a MN bike trail. Rod is survived by his son; two daughters; four grandsons; four granddaughters; three great grandsons; one great granddaughter; and many nieces and nephews. He was preceded in death by his parents Norbert & Marlene (Gravunder) Lueck. Before Rod’s death he expressed his gratitude to the family and friends that have been supporting him these last few years. Including these family individuals: Ricky & Margaret (Anderson) Lueck of Chippewa Falls, Randy Lueck & Cindy Brown of Bloomer, Roland Lueck of Bloomer, and Norene Lueck of Eau Claire. Including these families on Penne’s side; the Freyberger Family, the Bellingeri Family and the Clitty/Freyberger/Short Family. Thank you to all who have cared, supported and prayed for Rod & Penne. As a memorial wish to Rod, please make a donation to your favorite charity.

The family of Rodney A. Lueck created this Life Tributes page to make it easy to share your memories.