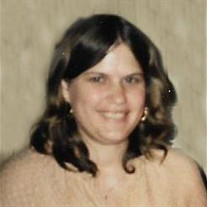 Robin M. Montanye, age 55, of Menomonie, WI passed away at Mayo Clinic Health System in Menomonie. She went to join her parents on Tuesday, May 16, 2017. She’d been fighting a lung disease for over 50 years and it finally got the best of her. She was born Sept. 30, 1961 in Menomonie, WI to Ronald and Alice (Olson) Sather. Robin always wanted to be a nurse. It never happened but she worked in other areas in healthcare, from taking care of people in nursing homes (some of them her high school classmate’s parents) to selling drugs at a corner pharmacy. Many considered Robin a caring person, spending the last couple years of her mother’s life driving from Wisconsin to Minnesota to take her grocery shopping, to play Bingo, go Christmas shopping, or anything to help get her out of her apartment. She was thoughtful in other ways like providing some of her customers with the things they needed from money for their co-pays to providing a man with an air conditioner. She will be sadly missed. Robin is survived by her husband Allen, whom she married on April 23, 1983, the week after the snowstorm. She is also survived by her four children, Jessie Sather (Dusty Rarick), Mandy Montanye (Jeff Lynch), Charlene Haynie and Tiffany (Bryant) Neville; her grandchildren, Tyler Montanye, Eliza and Vanessa Lynch, Devon Sather, Alex and Jared Helgeson, Ryland Rarick, Viola Montanye, Hunter and Breleigh Neville; her siblings, Ronald “Dave” (Patty) Sather, Ronda Garrigan, Scott (Amanda) Sather and Terri (Martin) Spartz; nieces and nephews, other relatives and friends. She was preceded in death by her parents, grandparents, cousins, aunts and uncles. A Memorial Service will be held at 10:00 a.m. Saturday, May 20, 2017 at Olson Funeral Home in Menomonie, with Pastor Dale Moe officiating. There will be visitation at the funeral home one hour prior to the service on Saturday.

Robin M. Montanye, age 55, of Menomonie, WI passed away at Mayo Clinic Health System in Menomonie. She went to join her parents on Tuesday, May 16, 2017. She&#8217;d been fighting a lung disease for over 50 years and it finally got the best... View Obituary & Service Information

The family of Robin M. Montanye created this Life Tributes page to make it easy to share your memories.