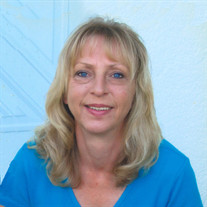 Roberta "Bo" Thatcher, age 62, of Knapp, WI passed away peacefully at home on Tuesday, September 24, 2019 after a brief but courageous battle with cancer. Roberta was born on August 17, 1957 in Menomonie, WI to Vernalee (Platson) and Kenneth "Bud" Johnson. The youngest of four children, Roberta graduated from Boyceville High School in 1975. In early 1981 she met her sweetheart and the love of her life, Jerry Thatcher. The couple eloped years later in Las Vegas on September 11, 1992. Over the last nearly 40 years the couple formed a partnership in love and business that many admired. They were successful business owners at their small engine repair shop from 1991 to 1999. In 1999 Roberta enrolled at CVTC and earned her CDL license and joined Jerry over the road in their semi and together they were able to see every state and every major city except one. Prior to that Roberta was employed at Ideal Door in Baldwin, WI and was most recently employed at Trient Technologies in Woodville, WI. Roberta was a magnificent mother. In 1979 Roberta gave birth to her daughter Renee (Parsons) McDonald and she and Renee would grow to become the best of friends. The two had a special bond and cherished connection that will always live on. Roberta was especially fond and proud of her grandson Noah. He was her light and joy even recently during the darkest of her days. They spent many cherished hours together laughing, drawing, bird watching and thrift saling. Roberta was a true animal lover and was so compassionate about helping and caring for animals. Roberta was previously a volunteer for the Dunn County Humane Society, and she carried a special place deep in her heart for all black lab dogs. Throughout her life she maintained a sweet and kind demeanor that won the trust and hearts of many, who even now are being changed by her witness of constant nurturing love and faith. Her signature gift of joy, shown through her constant smiling, laughter, and generous heart will never be forgotten. Left to cherish Roberta’s memory are her husband Jerry; daughter Renee McDonald (Ron Freeland), step daughter Gayla Thatcher (Josh Swedlund), her grandson Noah Montanez and step grandson Khameron Thatcher, sister Mary (Steve) Gates, brother Larry (Margie) Johnson and numerous other friends and family members. Roberta is preceded in death by her parents Vernalee and Kenneth “Bud” Johnson, sister Teresa “Terry” Hughes, and her beloved black labs Duke and Barkley. Roberta requested an intimate private service. Olson Funeral Home in Menomonie is serving the family. The family wishes to thank all of those who cared for her during her last days, for the outpouring of support, prayers and the love we have received. Roberta will be dearly missed by her family and friends and forever in our hearts. “If, by chance, you wish to remember me, do it with a kind deed or word to someone who needs you. If you do this, I will live forever.” - Robert N. Test

Roberta "Bo" Thatcher, age 62, of Knapp, WI passed away peacefully at home on Tuesday, September 24, 2019 after a brief but courageous battle with cancer. Roberta was born on August 17, 1957 in Menomonie, WI to Vernalee (Platson) and Kenneth... View Obituary & Service Information

The family of Roberta L. Thatcher created this Life Tributes page to make it easy to share your memories.