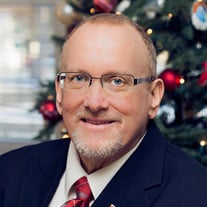 Robert A. Thompson (Bob, Bobby) completed the final chapter in the book of his life, writing the last line on April 19, 2016, at home in Menomonie, WI, surrounded by family. His final sentence simply written was 57 years, 11 months, 9 days. Bobby was born in Dodgeville, WI on May 10, 1958 and raised on a 400 acre dairy farm in Hollandale, in Moscow Township. He attended Kindergarten through 8th grade in Hollandale Elementary School and graduated in 1976 from Pecatonica Area Schools. He graduated from UW-Madison in 1981 with a Bachelor’s Degree in Occupational Therapy. In 1996, he received his Master’s Degree in Education from UW-Stout. He was born as Bobby into his family and left the world as Bobby. Writing and stories are life: Bobby just wanted to be known as a good father, husband, family man, good neighbor, and friend. He loved a good practical joke, riddle, humor and laughing. His favorite spots included: The Inca Trail in Peru—which he trekked in 2014; Schoodic Point and Mt. Katahdin, Maine— from when he lived in Maine in 1984, and the top of Mt. Tamalpais in the Marin Headlands across the Golden Gate Bridge near San Francisco, CA. In Menomonie, he enjoyed the Red Cedar Trail and Hoffman Hills State Recreation Area. Bobby delighted in trips to Lake Superior for hiking and sightseeing. He had a true love of putzing in the garden and watching different flowers bloom. Bobby’s favorite music included anything by Enya, Jane Olivor, David Sanborn, Paul McCartney, Billy Joel, Genesis, David Bowie, Cheap Trick, Queen, and many others from the 1970s. He absolutely loved growing up on the family farm with his mom, dad, brothers, and sister. He became “rich” by experiencing the lifestyle of farm life and work ethic through the change of seasons. Bobby’s favorite book of all time was The Land Remembers by Ben Logan. Bobby’s own book; Tales of a Little Banty Rooster, which was completed and published in 2015, saw his unique gift of memory come to fruition. Bobby’s most cherished work was that of being a caretaker and father having raised Jessica and Benjamin. He did this either full or part-time from October 1985 until August 1992 when he started work in the School District of the Menomonie Area. He raised them alone for 17 years. He married in 1983, and then separated and divorced in 1992. Bobby met Linda, the love of his life, remarrying in 2008, setting stages for remarkable journeys in the later chapters of his life. Bobby worked as an occupational therapist at The Dunn County Health Care Center from 1981-1983 and 1985 -1988. In 1983 he traveled, and was in a scholarship program, and lived in Cincinnati, OH; Warren, PA; and Bangor, ME until late 1984 when he returned to Wisconsin. Bobby also worked as an occupational therapist at UW-Stout’s Center for Rehabilitation Technology (1988–1989); Boyceville School District (1989-1992); Menomonie School District (1992-2013). He coached Middle School Boys basketball from 1992 to 1996; and coached Jessica’s and Ben’s elementary basketball teams from 1995 to 2000. He taught Sunday School at First Congregational – United Church of Christ from 1993 – 2001. He was the official scorer for the MHS Varsity and JV boys and girls basketball teams from 2003 – 2015. Bobby was five-year President of the local Menomonie Education Association; WCEA Board of Director from 2008-2013; WEAC NEA Delegate to six NEA Representative Assemblies; Chairperson of the WCEA Building Corporation from 2013-2014; and was also Vice President of the WEAC/Region 10 in 2015. He loved his role as single father – watching his children grow up. Family and family time was everything to Bobby. There was a tremendous love of gardening, hiking/trekking, photography, all sports, cooking, reading, traveling, and very small gatherings with close friends. Bobby loved caring for and keeping his woods a sanctuary for the neighborhood. He preferred the simple life and quiet times. When diagnosed with autoimmune hepatitis in 2000, life slowed down and he enjoyed simple pleasures and moments from then on. He never forgot how good Linda, Jessica, and Ben were when he was not feeling well and all those times they lightly tickled his feet or back to help put him to sleep or to make him feel better. Bobby was always so grateful that our heavenly Creator blessed him with his children’s births and lives and has since blessed him with a wonderful second chance at marriage with a very special person, in Linda. He also got the opportunity to get to know her children, Brian and Jenny, as well as grandchildren, Lyric, Arianna, and Oliver. Bobby wanted all to receive a big “thank you” for all the support to him and his family throughout his lifetime and especially through his cancer battle. Everyone who has their own memories of Bobby; please remember his loved ones and keep telling his stories. Cholangiocarcinoma may have eventually taken his life, but it never defined Bobby. Bobby is survived by his wife of eight years, Linda K. (Lien) Thompson of Menomonie; his daughter Jessica (Kevan) Smith of Sun Prairie, WI; son Benjamin Thompson of Chicago, IL; stepson Brian Jr. (Kristy) Flanigan of Walnut Creek, CA; stepdaughter Jennifer Flanigan of Pensacola, FL; brothers, Douglas (Patricia) Thompson of Dodgeville, WI; Bruce (Kathleen) Thompson of Arlington, WA; James Thompson of Hollandale, WI; Dale (Thomasine) Thompson of Frankfort, IL; and sister Carol (Chester) Small of Dodgeville, WI; three grandchildren, Lyric, Arianna, and Oliver, as well as numerous in-laws, maternal and paternal aunts, cousins, nieces, nephews, friends, colleagues, former students, and hiking buddy, Bill Stuessel. To say he will be missed is an enormous understatement. Memorial Services will be held at 5:00 p.m. Saturday, April 30, 2016 at First Congregational – United Church of Christ in Menomonie. There will be visitation from 3:30 to 7:00 p.m. Friday April 29, 2016 at Olson Funeral Home in Menomonie. There will be another fellowship and visitation from 3:00 to 7:00 p.m. on Tuesday, May 3, 2016 at Yellowstone Lutheran Church in rural Blanchardville, WI. Bobby’s private burial will take place in Evergreen Cemetery in Menomonie and Yellowstone Lutheran Church Cemetery in Blanchardville. Olson Funeral Home in Menomonie is serving the family. To share a memory, please visit obituaries at www.olsonfuneral.com

Robert A. Thompson (Bob, Bobby) completed the final chapter in the book of his life, writing the last line on April 19, 2016, at home in Menomonie, WI, surrounded by family. His final sentence simply written was 57 years, 11 months, 9 days.... View Obituary & Service Information

The family of Robert A. Thompson created this Life Tributes page to make it easy to share your memories.

Robert A. Thompson (Bob, Bobby) completed the final chapter in...