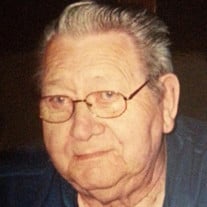 Robert M. Stene, age 80, of Chippewa Falls, WI formerly of Menomonie, passed away Tuesday, January 26, 2016 at Sacred Heart Hospital in Eau Claire. He was born September 26, 1935 in the Town of Rush River, St. Croix Co. WI to Milton and Agnes (Gullickson) Stene. He was raised in the Woodville area and graduated from Woodville High School. Robert proudly served his country in the U.S. Army during the Korean War. On April 7, 1958 Robert married Gloria Padden at the Lutheran parsonage in Woodville, WI. After her passing he later married the second love of his life Joan Greeley on June 9, 2007 at St. Joseph’s Catholic Church in Menomonie. He worked for the St. Croix County Highway Dept. for several years then for Andersen Windows in Bayport. In 1982 he suffered from a stroke which led to an early retirement. Bob enjoyed camping and traveling all over the United States. He liked to socialize and always made a point of getting together with family and friends. Bob was also a member of Masonic Lodge 164 of Menomonie. Bob is survived by his children, Scott (Nancy) Stene, Todd (Angela) Stene, LeAnn Harrison and Joni (Tom) Buege; grandchildren, Robert Stene (Cassandra Feala), Jennifer Stene (Ryan Walker), David Stene, Alicia (Derrick) Klund, Jacob (April) Gunderzik, Keith Stene (Lindsay Wolf), Kurt (Maggie) Schneider, Michael Schneider, Grace Harrison; many great-grandchildren; a brother Jerry (Marion) Stene; as well as other relatives and friends. He was preceded in death by his parents; his first wife Gloria and second wife Joan. A Memorial Service will be held at 2:00 p.m. Monday, Feb. 1, 2016 at Olson Funeral Home in Menomonie with Pastor Paul Pillman officiating. There will be visitation from 12:30 p.m. until the time of the service with a Masonic Service at 1:30 p.m. Military honors will be conducted by Menomonie Veterans Honor Guard. Burial will be in Peace Lutheran Cemetery in Menomonie at a later date.

The family of Robert M. Stene created this Life Tributes page to make it easy to share your memories.