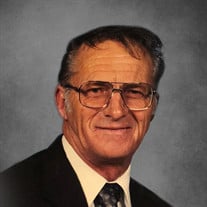 Robert “Bob” R. Stalker, age 85, of Boyceville, WI passed away peacefully, surrounded by family at The Neighbors of Dunn County, on Monday, Feb. 22, 2021. He was born Nov. 21, 1935 to Albert and Esther “Millie” (Samuelson) Stalker. His earliest years were spent in Minneapolis, MN, before moving to Boyceville, WI where he graduated high school. Bob enlisted in the U.S. Army shortly after graduating high school and served in Germany during the Korean War. After returning home he married his high school sweetheart Beverly Jump on June 22, 1957. Bob was well known for his hard work ethic and happy-go-lucky personality, along with being a perfectionist among all of his many talents. He began his working career at Sanna Dairies, and then progressed into a construction laborer, as well as a dairy farmer. On weekends, he fulfilled his love for music as a talented pedal steel guitar player and singer, with many different country western bands in the area. After selling the cows, he went to work for the Walmart Distribution Center. In addition to playing in the band, another favorite hobby of Bob’s was building Christmas decorations and decorating their yard. He took great pride in keeping their yard and farm picture perfect. Bob is survived by his wife Beverly; three children, Randy (Denise) Stalker, Rick (Sherilyn) Stalker, Brenda (Jeremy) Johnson; seven grandchildren, Daniel Stalker, Sarah (Joe) Karel, Jason (Suzy) Stalker, Ashley (Sam) de Leon, Trevor (Jenny) Jordheim, Torean Johnson and Tyra Johnson; six great-grandchildren, Wendy Stalker, Natalie Stalker, Amelia Karel, Lucas Karel, Blake de Leon and Cameron de Leon; a brother Merton Stalker; brother-in-law Donald Frieburg; sisters-in-law, Audrey Kuhn and Donna Otto. He is also survived by nieces, nephews, other relatives and friends. He was preceded in death by his parents, Albert and Esther “Millie” Stalker; his brother Ray Stalker; brothers-in-law, Earl Krueger, Jerry Otto and Stan Kuhn; sisters-in-law, Ellie Frieburg and Jeanne Krueger. Private Funeral services will be held at 11:00 a.m. Friday, Feb. 26, 2021 at Olson Funeral Home in Menomonie, with Pastor Shannon Mattison officiating. The service will be livestreamed at www.facebook.com/OlsonFunerals There will be a public visitation from 3:00 to 7:00 p.m. Thursday at the funeral home. Burial will be in Tiffany Cemetery in Boyceville, with military honors. To share a memory, please visit obituaries at www.olsonfuneral.com Bob’s family extends heartfelt gratitude towards the staff at The Neighbors of Dunn County and Comforts of Home for their care and compassion over the years. Thank you!

The family of Robert "Bob" Stalker created this Life Tributes page to make it easy to share your memories.