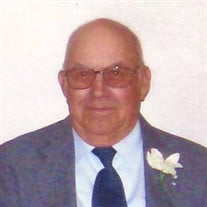 Robert H. (Bob) Radle, age 84, of Menomonie, Wisconsin passed away peacefully surrounded by his family on Sunday, July 17, 2016 at Mayo Clinic Health System in Eau Claire, Wisconsin. Robert was born July 9, 1932 in Arkansaw, Wisconsin to William and Barbara (Jungwirth) Radle. He grew up in the town of Dunn, and was the youngest of 12 children. Bob was in the band, Clem’s Old Timers, playing the banjo, guitar, and fiddle when he met the love of his life, Anita Oberle. They married, April 15, 1952 at St. Joseph’s Catholic Church in Menomonie. Together, they raised six children on a small farm south of Menomonie. They enjoyed spending time at their cabin, going fishing and boating with family and friends. After serving in the Korean War, Bob returned home to drive truck and farm until he became an electrician for the Presto Company. Bob left Presto to work as a mechanic for the Dunn County Highway Department, retiring in 1994. Bob was a warm and wonderful person with a great sense of humor. He loved to garden, play pool, and make sour kraut. Bob was a mechanic magician. He was always happy to fix anything for anyone. Anita and Bob kept a warm and loving home, especially because Bob was constantly stoking the wood fire. He loved all animals, especially dogs, but his greatest joy came from spending precious time with his family. Robert is survived by his daughter; Kris Winter; his sons, James (Erin), Anthony (Kristi), Joey (Georgina), and Bruce; twenty grandchildren; Shayne, Joy, Ryan, Jordan, Jared, Ben, Jessie, Jeremy, Cody, Kayla, Jenny, Devin, Henry, Clara, Owen, Sam, Jake, Eric, Babes, and Shannon; and twelve great grandchildren. He is also survived by many loving nieces and nephews, and dear friends David Schroeder and Bill Thibado. He is preceded in death by his loving wife Anita, his son Dale, his 11 older brothers and sisters, his parents, and his grandparents. There will be a graveside service at Riverview Cemetery in Downsville at 4:00 pm Monday, July 25, 2016. Olson Funeral Home in Menomonie is serving the family.

The family of Robert H. Radle created this Life Tributes page to make it easy to share your memories.