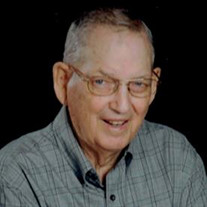 Robert S. Kenefick 83 of Elk Mound, WI passed away peacefully on Saturday Feb. 14, 2015 at Mayo Clinic Health Systems-Eau Claire. Bob was born Aug. 28, 1931 at St. Mary Hospital in La Crosse, WI as the only child of Steve & Ruth (Holmes) Kenefick. Bob wore many hats in his lifetime. He grew up on a dairy farm in Ferryville WI where he learned from his caring parents the values that would shape his life. He spent much time traveling Southwestern Wisconsin playing basketball and baseball for his area Crawford county teams. Bob married his sweetheart Olivia in Mount Sterling in 1956 and continued his love affair with her the remainder of his life. Soon after getting married, he served his country as a member of the United States Army. After getting out of the army they moved to Elk Mound where they developed a multitude of lifelong friends. Bob was an artificial inseminator for 34 years with Accelerated Genetics (Tri-State) where he distinguished himself with numerous industry awards and the rare distinction of breeding over 100,000 cows. He also sold animal health products and seed corn for different companies. Bob was active in the community where he served as a volunteer fireman for decades. He sponsored and bowled on a team for many years, continued his baseball career, and played and coached softball. Bob coordinated several fascinating vacations throughout the world for large groups of family and friends resulting in many lifelong memories. Bob was active in his children's lives teaching them to be kind, passionate, and responsible. Bob was a devoted Christian who lived his values. He was a member of Shepherd of the Hill. Bob had a true passion for animals. His dogs Mitzi and Sparky accompanied him from farm to farm as he made his daily routes through Dunn and Eau Claire counties. He rescued many animals. Bob also was a devoted fan of the Packers, Brewers, Badgers, and the Elk Mound athletic teams. He was an avid gardener who loved to plant flowers and feed the birds and squirrels. Bob is survived by his loving wife Olivia, his children Steve (Beth) and Sandra and his grandchildren Tyler, Trevor (Jordan) and Kirsten. He is also survived by dear aunts Lila Mikkelson and Freda Bachim as well as a number of special cousins and extremely close in-laws Tom (Clarice) Herreid, Milford (Joan) Herreid, Edwin (Osa) Herreid. He leaves behind a multitude of friends and acquaintances. He was preceded in death by his parents as well as many close relatives and extended family. Bob Kenefick will truly be missed! Memorial services will be held at 11:00 a.m. Saturday, February 21, 2015 at Shepherd of the Hill Church in Elk Mound with Pastor Mary Eide officiating with private burial at Barum Cemetery, Elk Mound Township, Dunn Co. Visitation will be from 4:00 to 7:00 pm Friday at Olson Funeral Home in Menomonie and also one hour prior to the service on Saturday at the church. Memorials may be given to Shepherd of the Hill or donor’s choice.

The family of Robert S. Kenefick created this Life Tributes page to make it easy to share your memories.