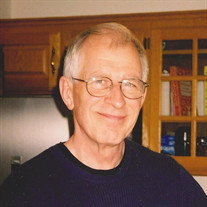 Robert Joseph Jasper, age 74, of Menomonie, WI, passed away Thursday, June 14, 2018 at his home. He was born Sept. 7, 1943 in Chippewa Falls, WI to Edward Jasper and Gertrude (Martin). He grew up in Chippewa Falls and graduated from McDonell High School in 1961. He received his Bachelor of Arts degree from the University of WI–Madison and his Master of Education, Professional Development, degree from the University of WI–Stout. Robert married Annette Dresang in 1967. They had two daughters who were their pride and joy. They later divorced but remained friends throughout his life. Robert taught at Menomonie Junior High School from 1971-1994. In 1995, he moved to Virginia where he worked as a teacher at the Virginia Beach Friends School and a counselor at Tidewater Community College. Robert later returned to Wisconsin where he worked briefly at Wisconsin Indianhead Technical College in Rice Lake before retiring. Robert was an educator, philosopher, and inventor. In retirement, he developed and patented the toy Lingo Linx ™ and enjoyed socializing with family and friends, studying Latin, sharing stories and jokes, playing cribbage, and practicing compassion. He found beauty and positivity in all things. Robert is survived by his two daughters, Christine Jasper (Robert Gondi) of Silver Spring, Maryland, and Sarah (Mike) Noreen of River Falls, WI, and his four grandchildren, Max Gondi, Zoë Gondi, Peter Noreen, and Aeva Noreen. He is also survived by his brother Gerald (Marilyn) Jasper, close friends Judy Ferber and Gary Medlin, and many dear cousins, nieces, and nephews. He was preceded in death by his parents, Edward and Gertrude Jasper, and his brother, Donald Jasper. Memorial Services will be held at 11:00 AM Tuesday, June 19, 2018 at the First Congregational United Church of Christ in Menomonie. Family and friends are welcome at the church one hour prior to the service on Tuesday. A luncheon will follow the service. Memorials in Bob's memory can be made to Kid's in Need Foundation.

Robert Joseph Jasper, age 74, of Menomonie, WI, passed away Thursday, June 14, 2018 at his home. He was born Sept. 7, 1943 in Chippewa Falls, WI to Edward Jasper and Gertrude (Martin). He grew up in Chippewa Falls and graduated from McDonell... View Obituary & Service Information

The family of Robert J. Jasper created this Life Tributes page to make it easy to share your memories.