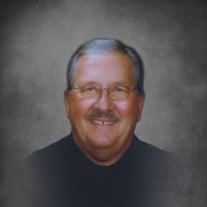 Robert C. “Bob” Husby, age 80, of Menomonie, WI passed away Thursday Nov. 11th, 2021, at his home after a long battle with cancer. He was born January 17, 1941, the son of Lawrence and Frieda (Klatt) Husby in Menomonie, WI. Bob grew up west of Menomonie on his family farm and graduated from MHS in 1958. After high school, Bob joined the Wisconsin Army National Guard. On May 12, 1979, Bob married Jody Halverson at First Lutheran Church in Rice Lake WI. In December 1988, he became the proud father of his daughter Ashely. Bob spent 32 years working for UPS and after retirement he worked for Westconsin Credit Union as a courier for 18years. For decades, you could find Bob on the racetrack. He drove for many years and shared his love of racing with his daughter, Ashley. Later in life he became the owner/pit boss for both Ashley, and his son in law, Josh. In the fall, he wouldn’t miss out on the opportunity to head to deer camp even after he no longer hunted. Bob loved his travels to Las Vegas and Laughlin and would never pass up a good game of euchre. Most of all, Bob loved his family and especially his grandchildren, Bristol and Kademin. Bob is survived by his wife Jodell “Jody”; his daughter and son in law Ashley and Josh Wahlstrom and grandchildren Bristol and Kademin Wahlstrom of Rice Lake WI. He is further survived by three brothers, Lawrence “Larry” (Cynthia) Husby, Morris “Butch” (Vickie) Husby, and Bradley Husby; two sisters, Jean (Chris) Langlois, and Aisha (Sikandar) Bashir; father and mother-in-law Charles and Marlys Halverson; three brothers-in-law, Stanley Voelker, Bill Halverson and David (Kris) Halverson; two sisters-in-law, Brenda Halverson, Sherry (Tom) Schultz; 26 nieces and nephews, 24 great nieces and nephews, 5 great-great nieces and nephews and many other friends and relatives. He was preceded in death by his parents, Lawrence B., and Frieda M. Husby; a sister, Carol Voelker, brother-in-law Michael Halverson and a great-great nephew, Colton Husby. A Memorial Service will be held at 3:00 p.m. Monday, Nov. 15, 2021, at Olson Funeral Home in Menomonie, WI with Pastor Heather Wigdahl officiating. There will be visitation at the funeral home from 1:00 p.m. until the time of the service. Burial will be at a later date in Northern Wisconsin Veterans Memorial Cemetery in Spooner, WI with military honors.

The family of Robert C. Husby created this Life Tributes page to make it easy to share your memories.